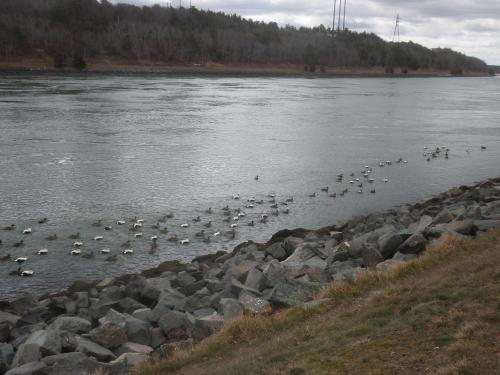 A parade of eiders, traveling west along the banks of the Cape Cod Canal

After a whole lot of rain, we were ready to get out to stretch our legs  so we headed to the Cape Cod Canal. It’s early spring and we were curious to see if the herring were heading up the fish ladder that is near the visitor center on the north side of the canal.

We headed down the stairs to the bikeway that travels alongside the canal, and saw people gathered all along the path, staring out at the canal. No, there was no large ship passing through right then. Instead, we spied a parade of eider ducks, several hundred birds, male and female, paddling within feet of the shoreline, against the current. We headed down the stairs to check out what was going on. 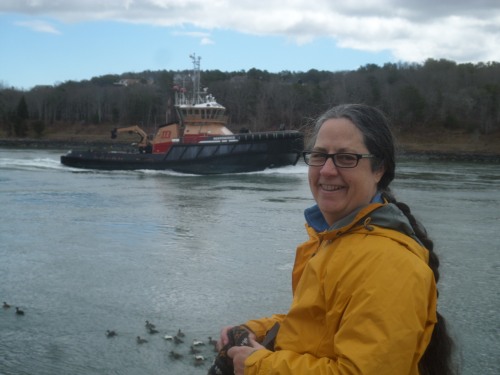 Eiders, and big ships, a grand day to be at the canal

On closer inspection we realized the ducks were swimming in an eddy, a backwash of sorts at the bend in the canal. It was near high tide and the current was rushing eastward toward the opening into Massachusetts Bay. But the ducks happily paddled along westward, against the tide until they reached the end of the eddy, where they  were swept out to the middle of the canal then to the back of the line, where they floated toward the embankment and entered the parade again. 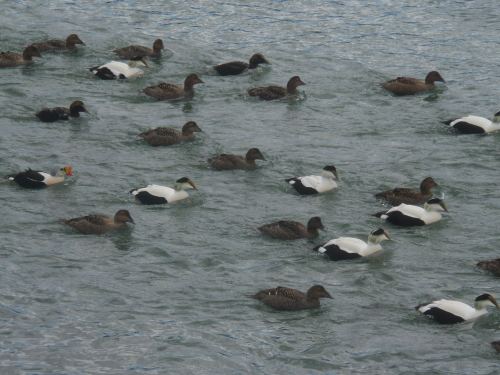 On the far left, you’ll spot the king eider, with the funny orange beak

“This has been going on for a few weeks,” one of the photographers perched along the shoreline told us. I looked again with my binoculars. Wait, one of these ducks was not like the others. They were all eider-like in body shape, but there was one that stood out, bright orange on its beak. Could it be? “It’s a king eider” one of the photographers confirmed, “They usually live about 25 miles off shore.”

I snapped some photos with my point and shoot camera, hoping I could catch the king eider among all the others. There were so many it was difficult to see if I would catch him!

We finally tore ourselves away to investigate the fish ladder, but it’s early–apparently no herring were ready to attempt the swim upstream yet. The water looked cold, and the current was strong from the recent rains. We headed east, toward Scussett Beach.

A somewhat shaggy-looking female common merganser, posing for us between dives for his dinner

There we found loons, and a soggy-looking red breasted merganser. His hood looked like it needed some combing, or at least a haircut. While we sat near the breakwater the tide shifted and turned back, heading westward toward Buzzard’s Bay. As the tide shifted the water calmed, and in that calmness we spotted a seal, poking its head out of the water and looking right at us. Over the next hour we spotted the same seal, or possibly another, popping to the surface, then diving back into the waters of the canal.

On our way back, as we drove near the visitor center, my husband decided to take an “explore” and turned right off Route 6. We soon found ourselves at what appeared to be a town park with trails, alongside the stream that flows out of Herring Pond.

This may be a good spot to look for herring in the coming weeks–if they make it back.

The small steps up into the pond will allow for migrating fish to return, if they are able, to spawn.

The park offered some board, open trails that appeared well-worn–clearly a favorite spot for local school children and others to visit nature’s classroom.

Snowdrops? alongside the stream coming out of Herring Pond

Alongside the stream at this park were crocuses blossoming in the spring sunshine, a welcome sight. Crocuses and snowdrops, perhaps? I am an appreciator of the natural world, not an expert. I welcome assistance with identifying birds and plant and trees.

Craggy branches, oaks perhaps? against the blue, blue sky on a wonderful day to be outside

In fact, we spotted some oak-like trees at Herring pond that looked more craggy than oaks where we live. There were no leaves around to provide clues–and so I grabbed a picture, and perhaps someone else will solve this mystery for me!

A parade of eiders

2 responses to “Surprise Guests at the Cape Cod Canal”