A Walk in the Rain-The Upper Charles, North Bellingham

I missed out on the sunshine that we enjoyed yesterday, working away indoors all day. But this morning a sudden cancelation opened up my morning and I called a friend, who I figured was crazy enough to think like me. “Want to go for a walk in the rain?” I asked.

“Sure,” was the reply. And so into the light, misting rain we went. 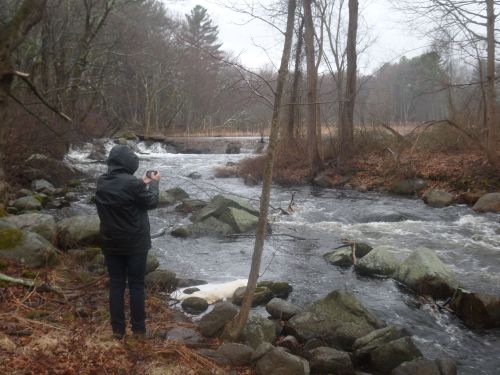 Brenda captures the energy and sense of peace one feels alongside the banks of the Upper Charles River.

The rivers are running pretty high right now, so I figured visiting the Upper Charles River in North Bellingham, just off N. Maple Street, might be a good idea. We risked, I knew, getting pretty wet–the area we were headed to tends to hold a lot of spring runoff. And, it was raining. Ah, well, it was worth a try.

Brenda, who accompanied me on this outing, creates “Peaceful minute” Youtube videos that are…wait for it…a minute in length. She brought along her camera and spent some time getting footage of the churning river. We then headed upstream to explore more of the area that is part town conservation land, and part Army Corps of Engineers floodplain for the Upper Charles River.

Alongside the swollen river, bushes glistened with raindrops.

Raindrops glistened on the bushes near the water, but my camera was not able to do justice to what our eyes saw. Ducks flew off as they heard our approach, but we were too far away to get a good look at them. We spotted deer droppings as well as coyote scat on the trail–clearly we were not the only ones who had visited recently.

A stone wall travels down to the edge of this stream and onto the other side. It provided a useful, though wobbly! bridge for adventurous travelers.

We encountered numerous stone walls as we traveled upstream along the southern bank of the river. One small stream flowing through the area nearly prevented us from going any farther until we encountered a stone wall that crossed the stream, creating a sort of porous dam. Behind the wall, water backed up and spread out, creating a marshy, mucky area. But, lacking a bridge to get over the stream, we took advantage of the artfully placed stones and managed to wobble our way across the remaining stones of what would originally have been a wall several feet high, probably built in the early 19th century. Cleary this was once a very different landscape, cleared and used for farming, not for the bushwacking we did today.

Having grown up in extremely flat southern Florida, I have never tired of the energy I feel when walking near waterfalls that we encounter. The dam across the Charles, within sight of N. Maple Street, serves no particular purpose any more, and the water has completely breached the dam.

Next to the rushing river

Nevertheless, standing next to the rushing river, the energy and power of the moving water felt strangely peaceful to me. The water is not quiet–it creates its own roaring soundtrack, and yet, the river stayed within its banks on a misty, moisty morning.

4 responses to “A Walk in the Rain-The Upper Charles, North Bellingham”