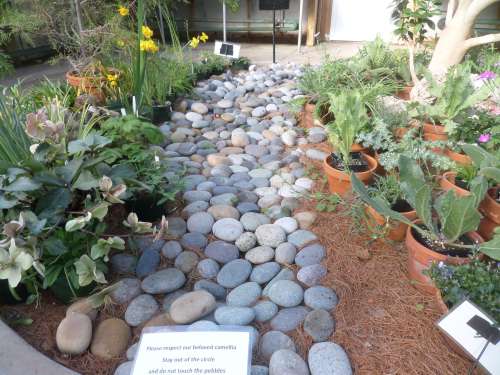 In the greenhouse at Wellesley College

The trails hereabouts were all clear as we approached spring, until we were hit with a late season blizzard, and so it’s back to icy trails and the challenge to find safe places to walk. When my hiking buddy Jennifer suggested visiting Wellesley College’s Botanic Gardens, my first thought was, “Yeah, no ice!” I did not, however, expect to be transported back to the years of my childhood.

The first greenhouse we walked through was filled with cacti, reminders of our travels to Arizona, a foreign (to me) landscape then, a fearsome landscape filled with thorns and spikes, even now.

Daffodils and amaryllis and pink

From there we wandered into a much warmer room filled with camellias, daffodils, a flowering amaryllis, pinks, and other flowering blooms.

We learned that the camellia had historic significance to the Wellesley community. Many of the plants had labels with Latin as well as common names, and scattered throughout the multiple rooms were signs explaining ongoing experiments.

The next room we entered was warmer still, quite humid, with one wall of the room built of what appeared to be coral rock. Ah yes, my time travel had begun, propelled by a strong sense of place, back to the yard of my childhood, in tropical South Florida. The stories came slowly as memories stirred.

Jennifer hanging out with the bananas

Jennifer was an understanding story listener, commenting occasionally, but mostly allowing me to take in the plants and allow the memories to bubble to the surface.

The coral rock brought up images of my visits as a child to Viscaya in Miami, an Italian palace reconstructed in the new world. http://vizcaya.org/ My parents’ first house was in South Miami, and I grew up hearing about  my father’s efforts to dig a hole in the coral rock that was their yard, so my mother could plant a rose bush. In the story, digging one hole was an all-day affair for my dad, ne that included the use of dynamite to break through the coral rock just below the surface.

Back at the Botanic Garden in Massachusetts, we strolled by a few orchids. I touched them and walked, in my imagination, through my parent’s yard, filled with the orchids that had been my grandparents’, boxes of flowering exotic plants that filled our outside porch, and our small yard. IN the greenhouse a staghorn fern grew around a post. A monkey leg fern grew (not very happily–its “legs” were supposed to be soft and fuzzy, but this greenhouse’s monkey legs were dried out, only one spot showing the fuzziness of a healthy fern). Yes, we had all these plants in our yard, or on the back porch. 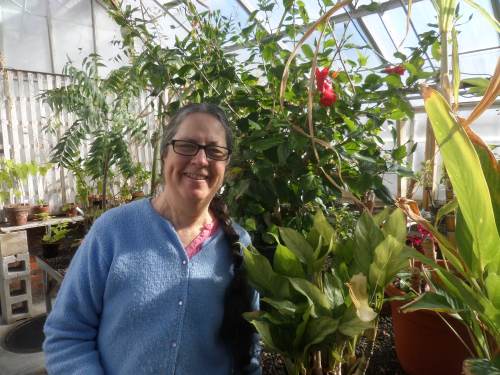 Me and the hibiscus

Here in the present hibiscus plants put out blossoms, and I had to resist the urge to pick them as I had as a child, just because they were fun to play with and pull apart the blossoms. Jennifer and I examined the plants with multi-colored leaves and wracked our brains trying to recall the name of this plant. “Croton!”, she finally called out. Yes! That was it–banks of crotons filled my mother’s flower beds. Used as colorful houseplants in these northern climes, the colorful crotons were not nearly as treasured where I grew up, where they competed with all the other lush foliage of the tropics.

Sheflera, or umbrella plant, grow much larger in tropical climates than in the restricted confines of a greenhouse

Then I spotted the sheflera. We called this the “umbrella” tree–leaves growing from each branch in an umbrella, circular pattern. My brother scaled our umbrella tree to climb onto our roof when he was quite small, much to my mother’s dismay. In the greenhouse I spotted a rubber tree plant. Yes, I had one of those too, a left-over from a plant sale when I was in elementary school. 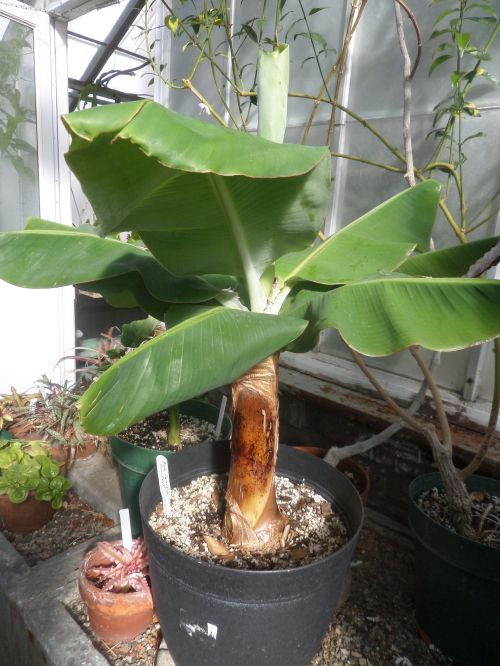 It may have been the same plant sale when I got a banana tree and planted that in our back yard. The rubber tree flourished, as did the banana tree. But it was the stalk of bananas that inspired wonder. I’d eaten plenty of bananas in my life, but had never had the opportunity to see how the stalk emerged from the tree, nor how the sheath covering each row of fruit peeled back, row after row, revealing the maturing bananas.

It should have been no surprise to me that I had a hankering for some “comfort food” after this sojourn to the land of my childhood. I stopped by a local breakfast and lunch place, James’ Breakfast and More, http://jamesbreakfastandmore.com/ on Rt 140 in Wrentham, where once I’d had the most amazing corned beef hash. I ordered the hash, which was just as wonderful as I remembered.

James’ corned beef hash with no grits–but next time, yes!

I stopped at the kitchen window to thank the chef, but told him it would have been even better if he served grits. “But we DO have them!” he smiled, grabbing a container and handing me some grits to go with what was left of my hash. “Next time you just ask for them to go with your corned beef hash; we’ll take care of you,” he promised. And since it was James I was talking to, I know he’ll remember. Grits and corned beef hash were a staple in my house growing up, a meal my mother, a native Floridian, had grown up with herself, and food my dad, who started out life in Minnesota, learned to love. 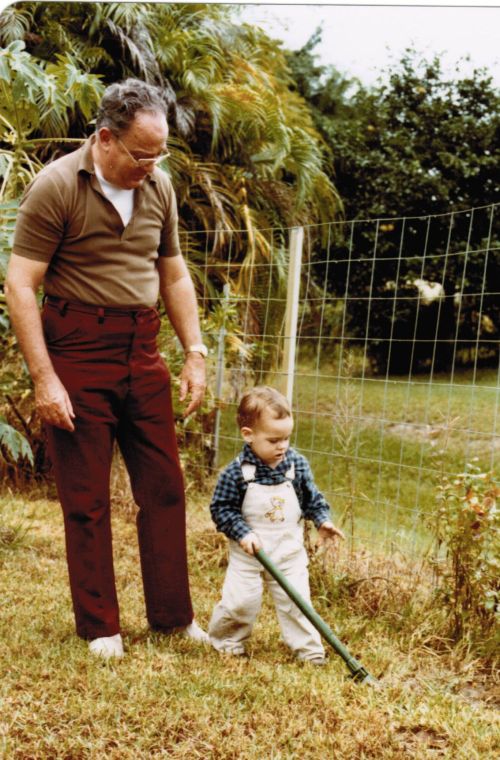 Those houseplants that sit so primly on your window sills? Very likely I spent time growing up with plants of those sorts. But the plants in our yard grew with wild abandon, prolific, huge, lush, rich. We did little besides plant them and watch them grow–fast! Our yard had been at one time wild everglades, with nearby thick tangles of mangrove swamps along the coast. The plants in the greenhouse at Wellesley bore enough resemblance to the greenery of my childhood that I was allowed to travel through space and time to the yard I grew up in, and a time that is gone. The house has been long sold, but the people who purchased the house bought it because of the yard and the plantings my parents introduced and nurtured.

To learn more about the Botanic gardens at Wellesley College: http://www.wellesley.edu/wcbg