Massachusetts Walking Tour gets to Plainville

Walking Tour musicians take the stage outside, with the Ten MIle River nearby

Concert goers enjoying the show next to the Ten Mile River

The evening’s concert began outdoors on a hot, humid evening, but during the concert we noticed people kept pointing up. The crowd exited the pavilion to see what was going on, and spied a circular rainbow right overhead. 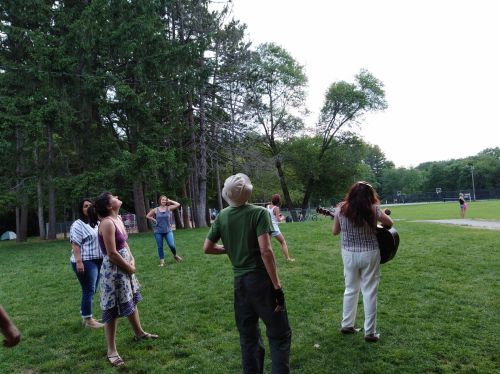 Looking up to see the circular rainbow

No pictures, the cell phone camera was not up to capturing the view, so we settled for one of many folks looking up, enjoying the sight. Then it was back to the regularly scheduled concert. 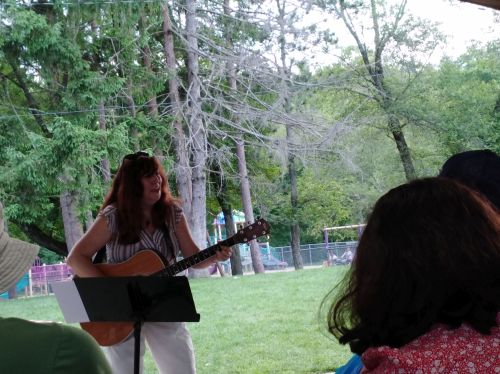 Collette O’Connor resumes her set after briefly taking us out of the pavilion to enjoy the rainbow!

Collette O’Connor was the musician who stopped her presentation to draw us all outside the pavilion to take in the rainbow, before resuming her musical offering. 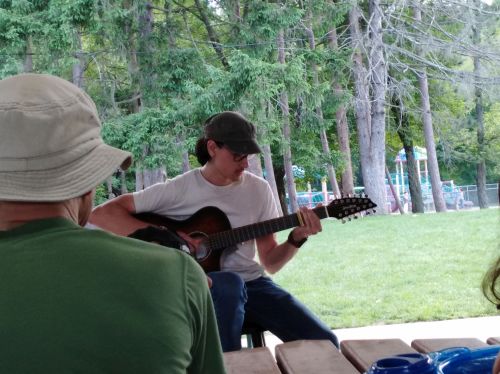 Eli Go offered some slide guitar on his twelve-string guitar

We had a return musician perform. Eli Go had shared a few guitar tunes in Norfolk earlier in the tour, and wowed us in Plainville with some slide guitar.

Ric Allendorf gets the crowd smiling

Ric Allendorf’s warm style of music won over the crowd as he share some tunes. 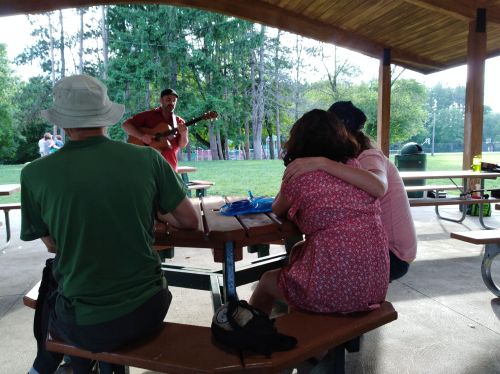 Cello quietly takes in the music before preparing to leave. We hated to see her go.

This was the last night for one of the Walking Tour members. Cello spent the first week with the tour, walking, camping, and singing, most often in the background, but a few times taking center stage.

Cello (on top of the rock, with Mark Kilianski) lent her own quiet presence and calm to the first half of the tour (picture at the top of Knuckup Hill in Wrentham)

She had other commitments, so after a tearful farewell, she headed on.

The tour will feel her absence. Safe travels, and happy trails, sweet girl.

Wherever they travel, the musicians are ready to play

More rain is predicted, but the musicians are prepared. After a day of rest, they will head on deeper into the Ten Mile River Watershed. Next stop: North Attleboro.