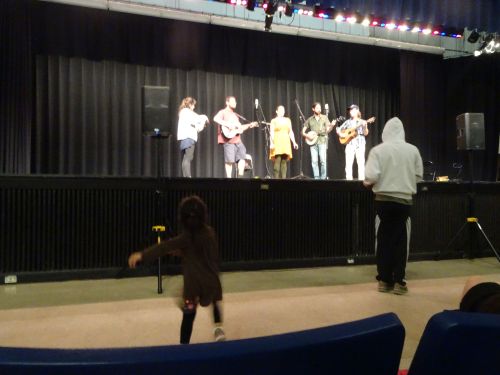 Walking Tour musicians on stage in Mansfield, with concert goers joining in to dance and sing

Yes, the Massachusetts Walking Tour continues to walk, and arrived in Mansfield in the company of several fellow walkers who joined the troupe for the entire day. Participants range in age from about 4 to folks in their 80s at the concerts, and walkers are aged about 9 to folks in their 70s. Children with special needs have taken part in the festivities, and been fully included. 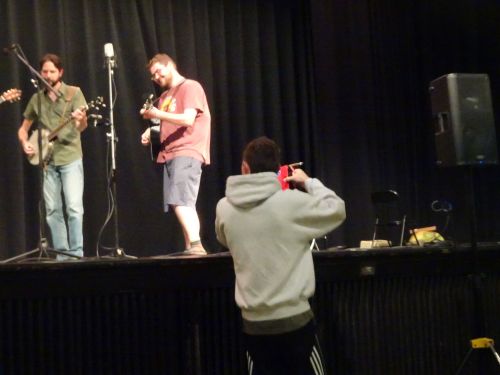 A tiny accordion became a quiet part of the show

And lots of regular folks have joined in to listen, sing along, and even dance. 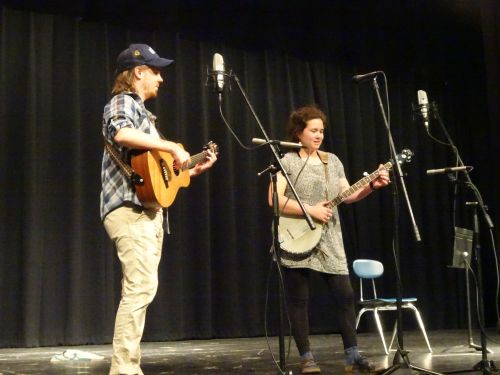 Mark Kilianski and Cello, who has walked with the musicians all this week, offer some special music together for the crowd

This has been a wet kind of week, and yes, the musicians have walked through the rain. The visit to Mansfield had had an outdoor concert planned, and with the damp weather continuing, the concert was relocated to the Qualters Middle School in Mansfield. We worried that people might not figure out where the concert was, but about 40 people found us and joined in the fun. 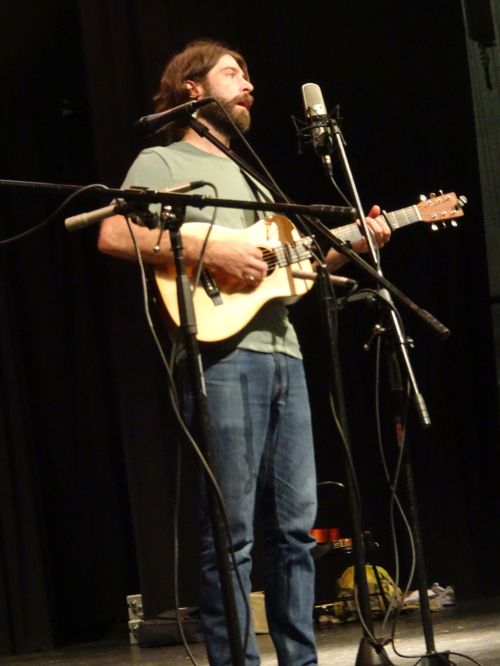 Kyle came all the way from Philadelphia to join us, and brought his sound system as well.

Musicians came from quite a distance to provide entertainment. (Toronto, Philadelphia, and the Cape!). 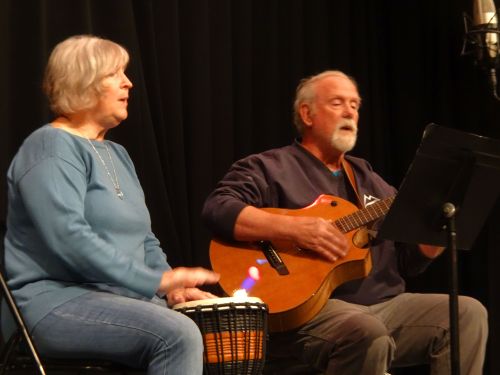 “Sweet and Sour” musicians joined us from the Cape

Competing concerts the same night in the area may have suppressed turnout, 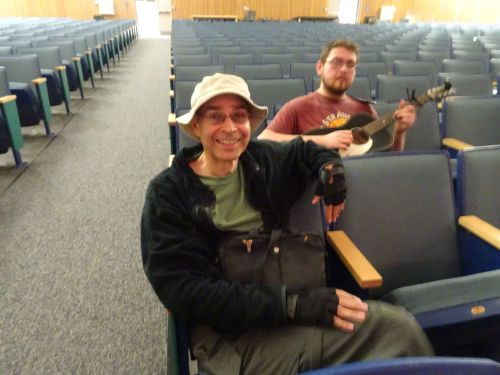 Bob (in front) has managed to attend every concert so far!

but of those who came, all left with smiles. 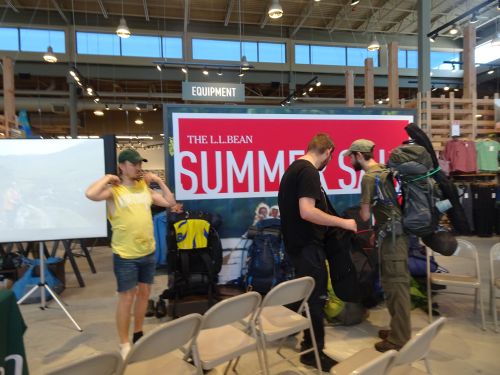 Settling in at the L.L. Bean store in Mansfield

The next morning, after camping at a host family’s yard in Mansfield, the Walking Tour joined me at L.L. Bean in Mansfield to offer music at the “Easy Walks in Massachusetts” book signing event. 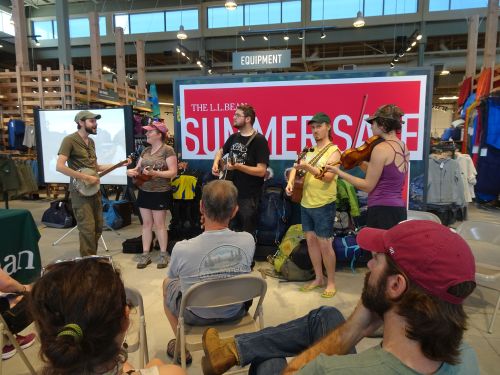 The group arrived with backpacks and instruments at hand, and offered a few tunes to those who came for the book signing, as well as store staff, and other surprised shoppers. 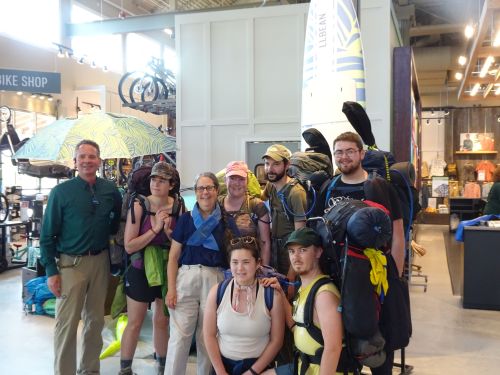 John Smith (far left) has worked tirelessly to help make this event come together at the L.L. Bean store. John will also lead the Sunday hike to Knuckup Hill in Wrentham, just prior to Sunday evening’s program

We handed out lots of postcards with the touring schedule and invited everyone to join us for the remaining programs. 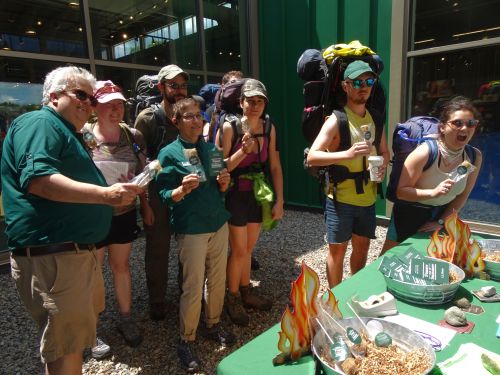 Silliness with s’mores and backpacks

Once the event was done, the musicians headed out to Wrentham to their next host family. 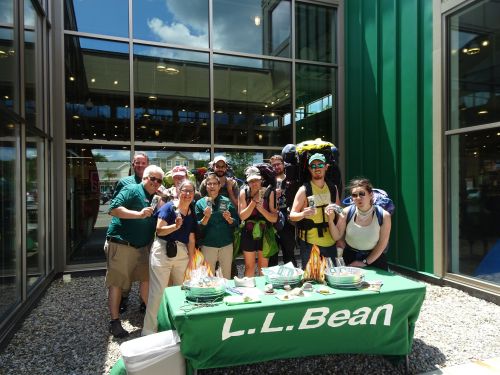 They stopped for a few pictures with the L.L. Bean staff and grabbed some s’mores that the store was offering as a fun event. A few folks even tossed some beanbags at the corn hole game. 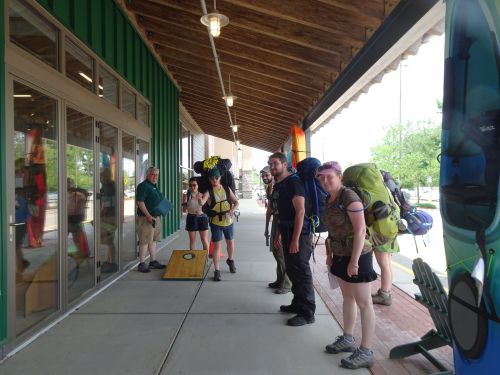 Corn hole toss before heading out for Wrentham

Thanks to John Smith, event organizer at L.L.Bean in Mansfield, who worked hard to help make this event work so well at the store, and who will be helping lead the “Easy Walk” in Wrentham Sunday afternoon. The walk will be just prior to the concert.  And thanks to the Mansfield Cutural Council for fuding the visit in Mansfield, and Mansfield Parks and Rec who made sure we had a place to hold Mansfield’s Concert! Check upcoming details at  Massachusetts Walking Tour

She has been a freelance writer for numerous local, regional, and national publications for the past 20+ years, has helped numerous families to save their stories, and has recorded multiple veterans oral histories, now housed at the Library of Congress. She is a co-author of the recent community history, Bellingham Now and Then.