Florida is a Big State! 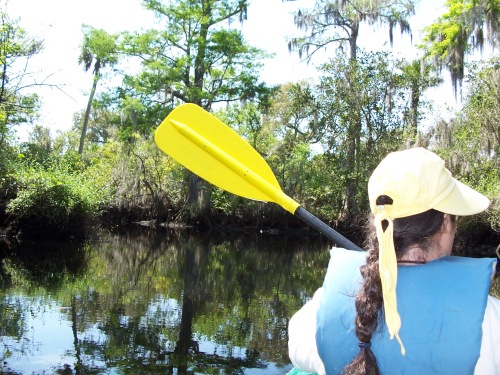 Kayaking on the Loxahatchee River, at Jonathan Dickinson State Park

While I  raised my children, and have lived in Massachusetts for most of my life, I spent my formative years in Florida. In fact, it was not until I left for college that I managed to cross the state line to escape Florida! When I traveled in later years with my husband, the special places in Florida began to reveal themselves to me. On the east coast, Jonathan Dickinson State Park, just north of Jupiter, Florida, offered us a chance to rent kayaks and paddle on the Loxahatchee River. 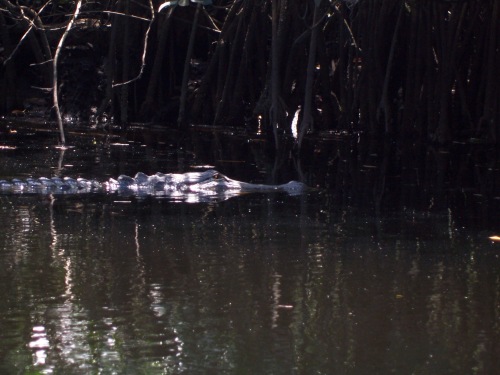 Yup, gators nearby in those waters…

Yes, we shared the river with native alligators. And yes, those gators seemed pretty interested in our chicken sandwiches we had brought along on the trip. But all was well, and we lived to tell the tale.

The gulf coast offers sunsets every night, the opportunity to watch the sun appear to dip into the ocean as it sets in the west. We visited Sanibel Island, world famous for the sea shells people find on its sand beaches, but we were much more interested in the sunsets, and the bike trail that runs through town, and out to Ding Darling Swamp. In fact, one of our trips to Sanibel offered us the opportunity to ride a Sun tandem bike, which turned out to be the most adaptable tandem for my needs as we could have asked for. What joy to travel the bike trail through Sanibel and out through Ding Darling by bike.

Roseate Spoonbills at Ding Darling Swamp, with alligator hanging nearby

Ding Darling National Wildlife Refuge hosts an 8 mile paved loop trail through the refuge, making travel by car, foot, or bike very accessible. The undeveloped mangrove swamp gives a taste of what much of south Florida looked like prior to development that mostly began in the early 1900s. Especially in the winter, huge flocks of birds gather in the refuge, wood storks, roseate spoonbills, yellow-crowned nigh herons, and more. Alligators often wait as the tide shifts, and water rushes into the shallow water near the roadway. Unsuspecting fish are pushed into and out of the refuge’s inland waterways, Ah, the circle of life.

South Florida offers so many other local, state and nationally protected areas, the largest, of course, being Everglades National Park. A simple drive across either of the two main east-west roads through the Everglades, the Tamiami Trail, or Alligator Alley, offers a sense of visiting “Wild Kingdom!” as you watch the wildlife perched and slithering near the roads.

On the boardwalk, at Fakahatchee Strand Preserve State Park

Just off the Tamiami trail, we visited a small state park that offered a boardwalk out to a local alligator hole. The Big Cypress Bend Boardwalk at the Fakahatchee Strand Preserve State Park offers a long boardwalk that terminates at an alligator hole.

Otter feeding, just off the boardwalk–did they plan that?

We visited when the gators, were there, baby gators floated in the middle of the hole, while wood storks and Great Blue Herons waited on the sides of the pool, trying to avoid the adult gators, while the baby gators tried to avoid the predator herons hoping for an easy dinner. All seemed calm until near sundown, when the adult gators slid into the gator hole and started hunting.

At the alligator hole at the end of the boardwalk. Birds kept an eye on the gators

Soon the fish in the water hole began jumping out of the water, hoping to escape the silent passes the gators made through the water. As the fish stirred up the water, the baby gators got washed closer to the shoreline, and the herons perked up, ready to catch an unsuspecting meal. It was one of the most alarming and stunning demonstrations I have witnessed of the natural workings of the Everglades ecosystem. We were well out of danger on the upraised boardwalk, but we marveled at visitors who brought their little poodles and other small dogs along. We wondered if the gators were eyeing the littlest of these 4 legged visitors as hors d’oeuvres.

Northern Florida should probably be considered a completely different state, with a quite different history than South Florida, and different eco-system as well. My own travels have taken me most often to Pensacola, where much of my mother’s family is from. We spent every summer on Pensacola Beach, on Santa Rosa Island, at my grandmother’s beach house. We played, swam, water skied, canoed and sailed in the calm waters of Santa Rosa Sound.

Ft. Pickens, at the western end of Santa Rosa Island, which held prisoners of War during the Civil war, still stands, and is part of the Gulf Islands National Seashore. As kids, we loved to climb among the walls of Ft. Pickens, but I suspect that is not allowed these days. Regardless, there are miles of shoreline to explore in this area, with many birds finding refuge along the shoreline.

2 responses to “Florida is a Big State!”