History of the Blackstone Gorge

The Blackstone River rushes through the Gorge after heavy rains

The spring group walk promised to provide some history about the Blackstone Gorge. While I have often visited the gorge over the past thirty years I’ve been aware of it, I have never been well-versed in its past. For indeed, the gorge has a past, not just geologic, but a man-made past as well. 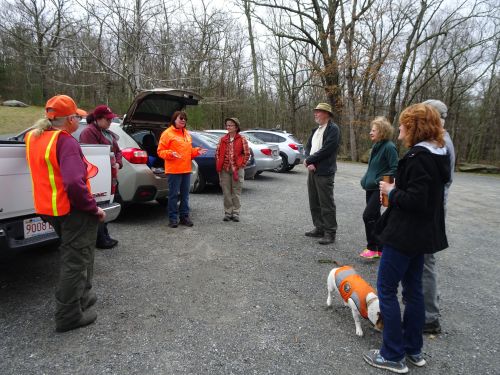 Preparing to head out for our walk

Tom Bik, who led the walk, is a Blackstone Heritage Corridor trail ambassador, a member of the Blackstone Historical Society, and one of those who was instrumental in the Metacomet Land Trust‘s fund-raising efforts to preserve this amazing spot from being developed into condos. He has an extensive pedigree when it comes to being involved with the town of Blackstone. When asked, he notes that his children are the 4th generation in his family to live in his family home in Blackstone. Tom clearly cares about the Blackstone Gorge a great deal. Others of us who love this place owe a deep debt of gratitude to Tom and others who had the vision and determination to raise the money and stirred up local support to save this unique place. 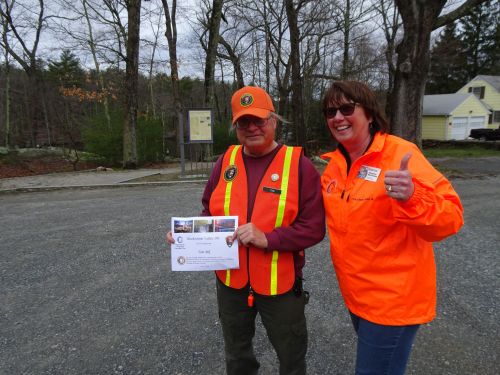 Tom Bik is a proud graduate of the Blackstone Valley 101 course!

We gathered in the parking area near the gorge just as the clouds began rolling away, on what turned out to be a perfect day to be outside. Suzanne Buchanan, Heritage Corridor volunteer coordinator, took the opportunity to award Tom with his “Blackstone Valley 101 certificate,” proof he had gone through the on-line program available to anyone interested in helping share the story of the Blackstone Valley. 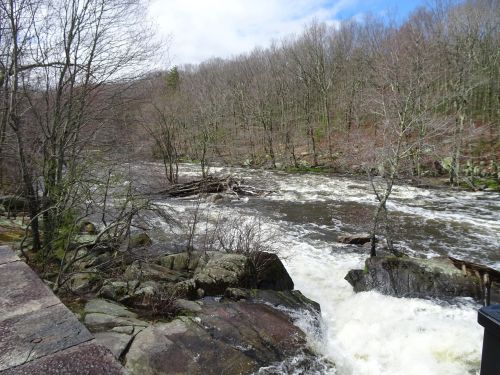 The rushing sound of water, so familiar to travelers who follow the path next to the river, was ratched up to a near-roar as thousands of gallons of water cascaded over the falls and tumbled over the rocks of this small canyon. 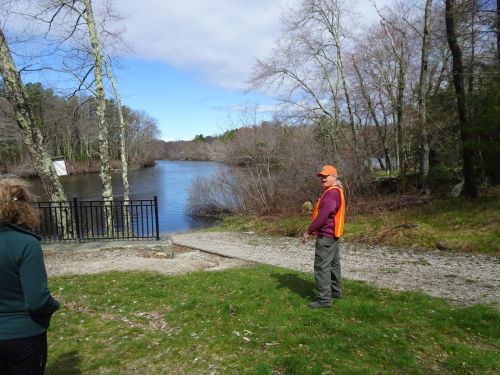 Tom pointed upstream north of the existing dam, to where the earthen dam lies submerged

Tom described to us a time when an earthen dam crossed the river, and wagons and foot traffic could traverse the dam, just north of where the dam is visible now. When we asked what happened to the dam, Tom assured us, “It’s still there!” In the past, when the river crested, water simply flowed over the earthen dam. But as mill owners sought more energy, they build another, then a third dam, effectively flooding the earthen dam that had provided access to the banks on the opposite side of the river. He also explained the significance of the gorge, describing how the height of the river progressively drops twenty-five feet, providing an optimal location for mill owners to build dams that provided power to three successive mills in close proximity to each other.

Once on the trail that follows the banks of the river, we headed to the Massachusetts-Rhode Island state boundary line, marked by a huge granite block on the edge of the trail. My children and I always enjoyed visiting and circling the granite post that marked this spot. But a few years ago someone decided they needed this post, and removed it, leaving only a small stump of granite in the ground.

Tom indicates the state boundary line, as noted on the marker at his feet

Jodie Madden and Val Stegemoen of Division of Conservation and Recreation (DCR) brought in another granite marker that would take a whole lot of effort to move. Our hope is that this woodland boundary marker will remain where it is for generations to come.

As we walked, various group members pointed out signs of new growth, for indeed, spring is upon us! 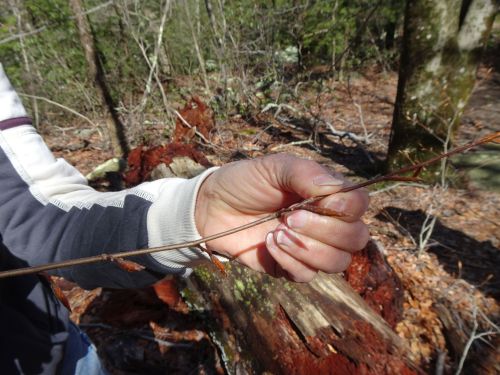 Ann Hanscom, a member of the Metacomet Land Trust, fondly grabbed the budding twigs of a beech tree, admiring the shape of the buds just about ready to burst open with spring. 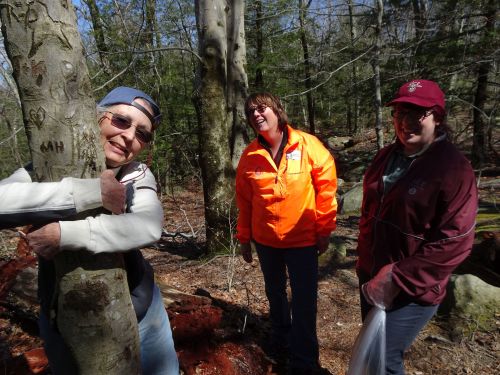 She then grabbed the beech and announced,”Yes, I’m a tree hugger!” In fact, the tree was just the right size for hugging. 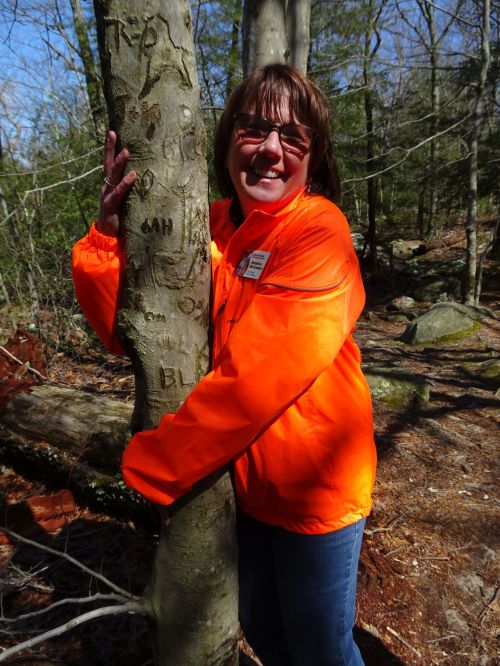 Suzanne is a tree hugger as well!

Kathryn Parent, from DCR, joined us on the walk and had brought some plastic bags for gathering trash along the way.

Gathering up trash, including broken glass, along the trail

Soon several participants were joining in on the hunt, determined to gather up trash along the trail. 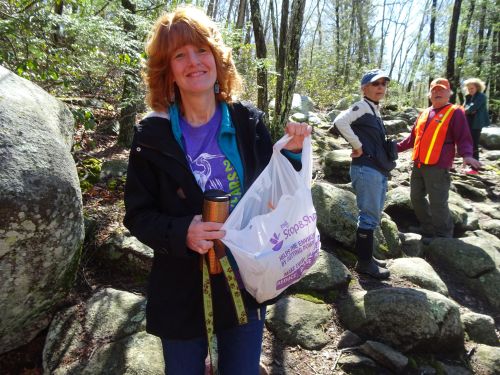 Bonnie shows off her “haul” from the trail

Bonnie Combs, chief cheerleader of the Heritage Corridor’s “Trash Responsibly” program, filled almost an entire bag with trash while on the walk with us.

Although this trail is one of my favorites, it is right on the edge of what might qualify as an “Easy Walk.” Regardless, I was unwilling to leave it out of my “Easy Walks in Massachusetts” guide book of this area.

The Blackstone Gorge gets top billing on the cover of the book, “Easy Walks in Massachusetts”

The photo on the book’s cover was taken at the gorge. It is such a special, glorious place.

Several portions of the trail are rock-filled, and today, just after the rain storm of yesterday, the rocks were somewhat slippery, making the footing even more challenging. 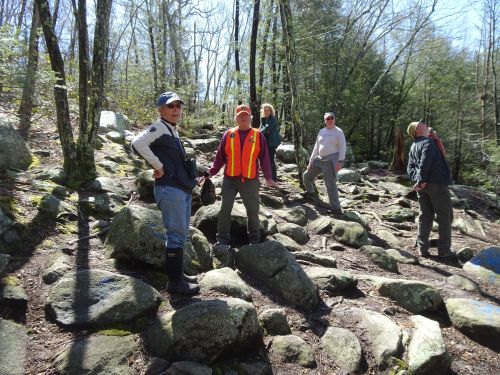 Boulder fields such as these make the trail alongside the river somewhat challenging, not really an “Easy Walk”

I was grateful for respectful offers of help to get me over the boulder filled section that lay in front of us on our way to the highest point of the trail, about 80+ feet above the river. 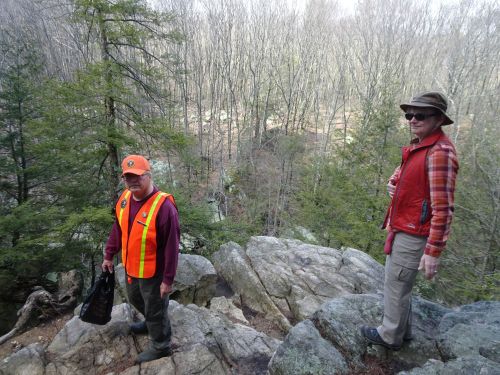 Up in the trees at the high point above the river

After climbing to the top of the gorge, the trail gently slopes back downhill. Where the path leveled out, Tom described the area as a place where native Americans camped and caught fish.

He pointed out to us several smoke-blackened rocks where campfires had been lit over generations, and where fish were cured.

Downstream the river is much calmer

We took an easier path back to our cars, but the sound of rushing water stayed with us throughout the walk.

Mountain laurel blossoms from a past spring–coming soon!

In just a few weeks, mountain laurel along this trail will be bursting forth with blossoms that will take your breath away. But in fact, regardless of the season, the gorge always has something truly beautiful to offer. Thanks to all who worked so hard to ensure that this special place is preserved for future generations, and is available for us to enjoy right now as well.

For more about the Gorge in different seasons: 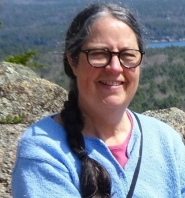 2 responses to “History of the Blackstone Gorge”