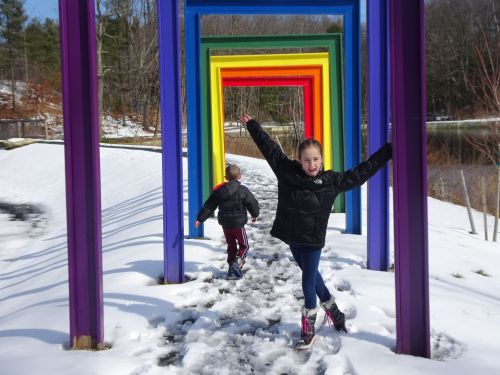 Fun at the Franklin Sculpture park

Time with energetic grands during February vacation means trying to figure out where to head outdoors where kids will have fun and Grandma will not break her neck! The sun was shining, we’d grabbed a quick lunch, then headed right around the corner to the Sculpture Park in Franklin.

The obligatory snowball throwing session used up some extra energy

A grandboy always ends up getting driven past this sweet small park next to the ice rink, since ice skating is often on the agenda, not exploring the sculptures. But today Grandma was in charge of the plans, and we all decided the park was a great destination. 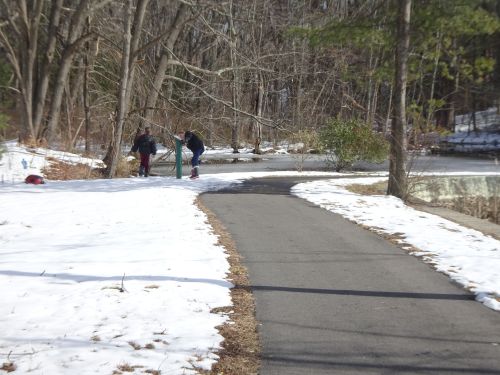 Sections of the paved trail around the pond were bare

Turns out, some of the pathway around the pond were ice-free, but other sections were packed down and very icy.

Many, many mallards followed our every move as we circled the pond

We picked our way along the path, found some fun sculptures to play with, and enjoyed the large flock of ducks who paid close attention to us as we circled the pond.

We found parking next to the road, but we could also have parked at the lot attached to the Franklin police station on Panther Way. It had been several years since these kids had visited here, but they missed the lollipop garden (painted ping pong balls stuck on wires and strewn in the grass next to the path). Alas, it was a cute idea, but the ping pong balls did not stand up to the weather and those who had other ideas for ping pong balls. 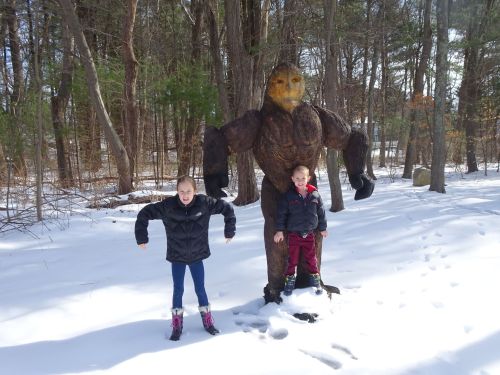 Perhaps she has a future on the stage?

Several large statues provided opportunities to be pretty silly, mimicking the poses, or pretending to be alarmed. 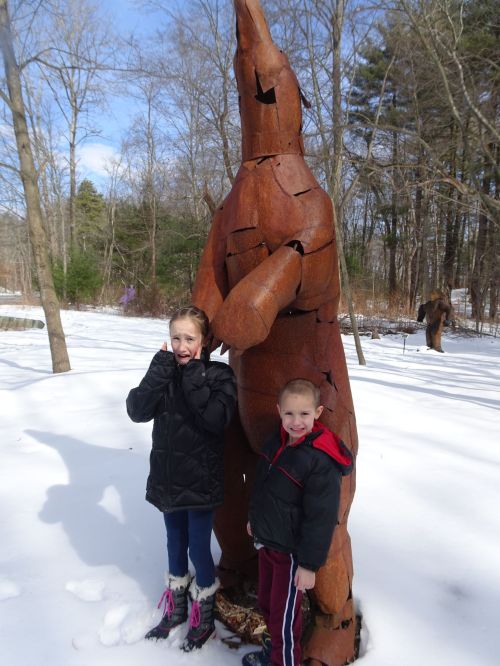 A rather benign bear keeps watch at the park

I was happy to be the photographer who captured it all on camera. Sometimes I think a girl has a great future on the stage!

We were not the first to visit this park after the snow, and it was fun to see that the ducks had also been busy tramping through the snow, both on the path and on top of the ice that covers part of the stream that feeds into the pond, a focal point of the park. Pictures probably do not capture what the sunlight showed, as the male mallards’ heads were almost purple, rather than the green one expects to see.

“I’m surprised no one else is at the park,” was a girl’s parting comment as we left. Hmmm, maybe they just didn’t realize what a bright, sunny, warm winter day it was, and that, despite the ice, there were lots of spots to walk in untrampled snow and keep one’s footing. And have fun watching the ducks watching us!

Peering out from the eye of the sculpture