A Change of Plans– Derry, Windham, and Salem, NH Railtrails

View of Hood Pond, at Hood Park, Derry, one of the parking areas for the railtrail

We had planned to explore the Rachel Carson National Wildlife Refuge in Wells, Maine, south of Portland, but we got started late and Saturday traffic promised to keep us driving, and driving, and driving, instead of getting outside pedaling and exploring on our tandem bike. And so we took a quick detour over to Derry, New Hampshire and found Hood Park, one of the parking areas for the Derry Railtrail. 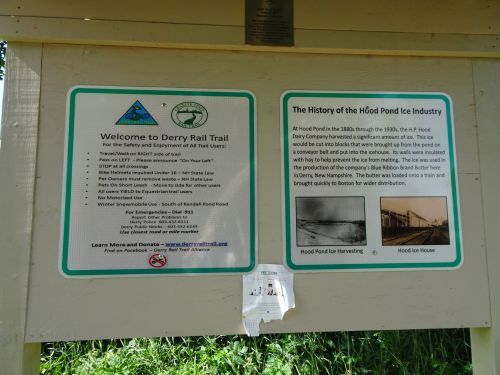 Ice from this pond was used to preserve butter, not ice cream, (hhich Hood is better known for today) from the 1880’s to the 1930’s

Queen Anne’s lace along the trail next to a pond, on the Derry section of the railtrail

The trail heads north only a short ways before stopping in a neighborhood. Heading south begins with a ride through downtown Derry and its municipal buildings, crossing Rt. 102 in the downtown, then heading south through some swampy  areas. Throughout the length of this three-twn trail, it was apparent that the railtrail does, indeed, follow former rail lines. On other trails we have ridden, the railtrail has often been forced for many reasons to deviate from the railtracks of yesteryear. But this three-town connected trail system sticks pretty close to the raised railbeds that carried trains in the past. This means that the trail is incredibly level, with a  hardly noticeable incline heading back north from Salem. The trail offers a great link between the towns for walkers, bikers, skateboarders, and more.

On a  hot July day, the large trees and ample shade along much of the trail was welcome. The Derry section traveled rather close to Rt. 93, which made that portion of trail pretty noisy. We’d never noticed the trail when we’d driven the highway in the past, but the highway is very obvious when on the railtrail.

There is room for multiple (probably at least 20) cars at the Windham Depot,  An old depot building appears to be carefully preserved,

Small section of rail and old railcar, across the street from the Windham depot

and an old section of rail and a railcar are parked across the street from the depot as well, a reminder of how the area was used in the past. 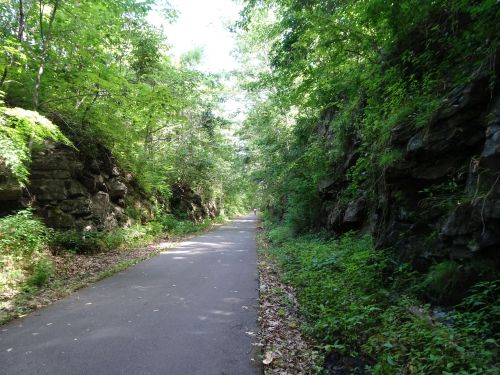 Ample shade in the areas with these massive rock cuts

We traveled through a number of rock cuts while on the Windham section of the trail.

Taking a break to get some pictures along the way, and enjoying the shade of the rock cut

Expect to come across numerous grade crossings, and at least one crossing that requires a small jog to the right, headed south, to get back on the trail on the other side of the street. This section was quiet, with lots of woods, and some lovely pond views. 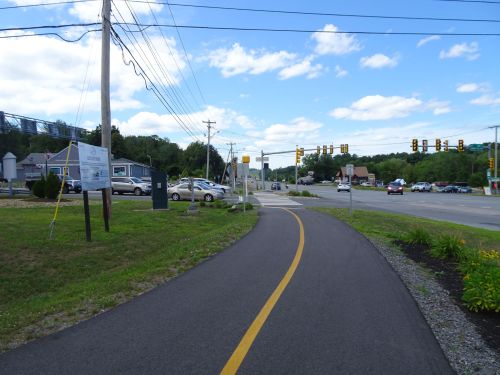 Busy Rt. 28 in Salem. Pedestrian crossing signals are essential, and much appreciated, in this area.

Once we reached the Salem section of the trail we found the noise levels, from traffic along Rt. 28 to be unpleasant, so turned back before we had gone very far. We did, however, make it to the cattle crossing, 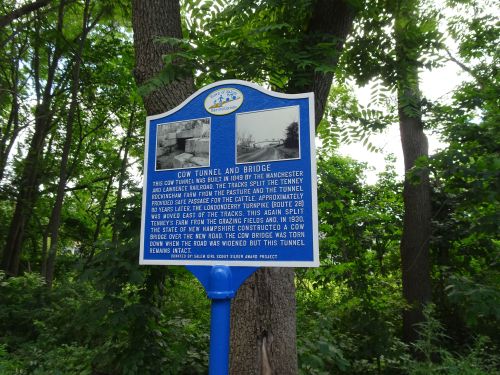 (or as some folks we know, refer to as “bossy crossings,”) which allowed the farmer to move his cows from pastures on one side of the tracks to the other.

Cattle crossing, which now would maybe be high enough to let goats through, but not normal-sized cows

The crossing has now been rebuilt, and normal-sized cows would have an almost impossible time standing up to walk underneath the present day crossing.

The dedicated walking-biking trail next to Rt. 28 in Salem is certainly is an asset for walkers and bikers, allowing folks to be able to avoid traveling directly on the busy highway, but since we were not local, only visiting, we turned back and were relieved to reach the Windham section again which offered the quiet we enjoy on many of our bike explores.

Once back at Hood park from what was about a 14 mile round trip, we looked, but did not touch, the massive poison ivy leaves that seemed to flourish in the area. The pond looked inviting, but signs warned that the water was probably unsafe for swimming because of high bacteria levels in the water. This explained the empty beach area on a hot summer’s day.

We were able to make it back home with little difficulty, but we heard from others that the traffic heading north from Boston all that Saturday was quite heavy. While we didn’t get to take the ride we planned, we discovered some pretty spots along this trail system. And I got a chance to say hello to one of my sisters, who lives in right in Derry. Lesson learned–if heading to the Portland Maine area, best to pack the night before and leave as early as we can. Next time…

2 responses to “A Change of Plans– Derry, Windham, and Salem, NH Railtrails”