Along the railtrail, with great views of the Assabet River

We headed north a little ways (for us) recently to explore the Assabet River Railtrail. It is lacking only two miles where it stops in Maynard to connect with the older, existing trail that travels through Hudson, MA. It’s always a bit of an adventure for us when we decide to explore a new (to us) trail. We check out Google earth before heading out to see if we can figure out where the parking areas are. We check several websites to see if we can get any more clues from them. Often websites are not updated. Map keys that indicate what is built and what is still proposed are inconsistent at best. The very best thing, we have found, is to get out there and explore. 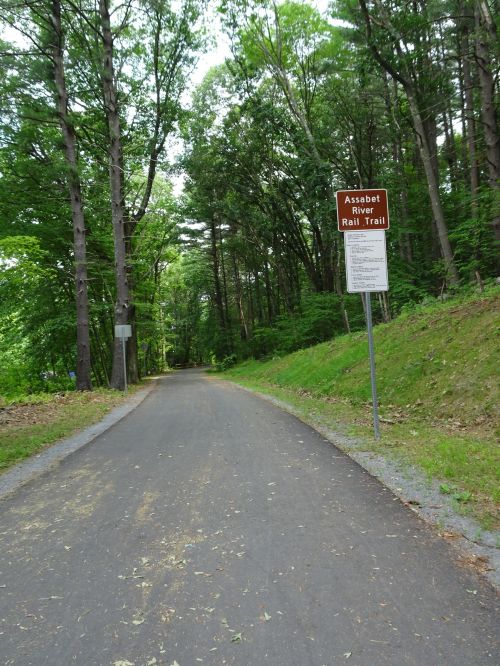 On the trail, for sure!

We packed a lunch, as well as cooling gear for me–I struggle with the heat, and I hoped we would find some shade along parts of the trail. For several sections, we were in luck! The Assabet River Railtrail opens up views of the Assabet river that were until recently not very accessible.We started by traveling on Rt 117 in Stowe, towards Maynard, and turned onto White Pond Road,

which deadends at the north side of the Assabet River Wildlife Refuge.

We were able to obtain easy parking at the refuge, and rode our bike down the hill to access the paved portion of the railtrail that heads toward Maynard, and into S. Acton. We intended to explore the wildlife refuge but ran out of steam once we had explored the railtrail. A return trip is needed, for sure!

Boat launch for kayaks and canoes, almost directly across form the parking area on Winter Street

Winter Street, as well as downtown Maynard offer easy access points, as well as municipal parking areas, and another access across the street from the S. Acton MBTA station. The trail follows alongside the Assabet river up to Maynard Center, which requires several road crossings. But it also offers options for several delightful looking places to stop and eat.  We found a boat launch (for canoes and kayaks) along the trail, quite near the parking areas at the end of Winter Street, which crosses Rt 117. 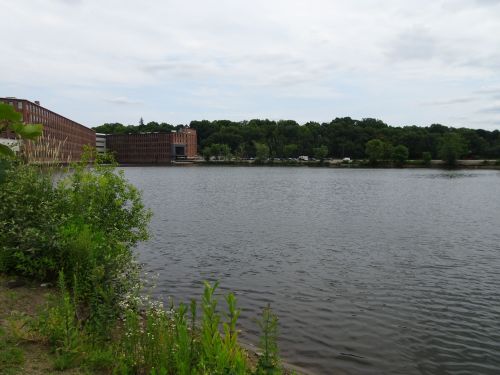 Views of the river from downtown Maynard

We passed a farmer’s market in downtown Maynard. Then we headed on north to S. Acton, nearly parallelling Rt 27 all the way to the end, presently next to the S. Acton MBTA station.

Interpretive signs, as well as a section of trail, with switch, next to the railtrail

This is a recently completed trail, and has been finished nicely, with interpretive signs at several stops along the path. Water views are found on many sections of the trail, and several interesting bridges carry travelers across swampy areas. Once south of Maynard Center, it is quiet and nicely shaded as you head closer to the wildlife refuge. 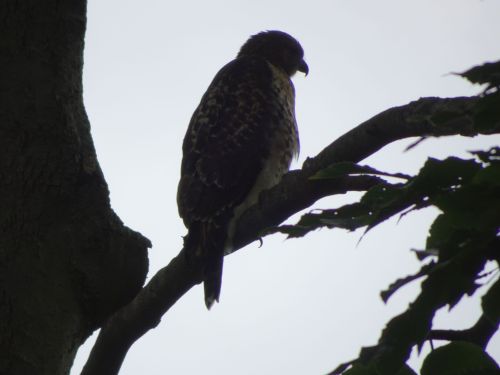 We stopped at one spot simply because of the noise–loud screaming was coming form the woods just off the trail. Turns out a juvenile redtailed hawk as nearby, and we suspect some of his nest mates were still in the nest, perhaps hoping for food. Regardless, it was an impressive sight to see this large raptor hanging out next to the trail. 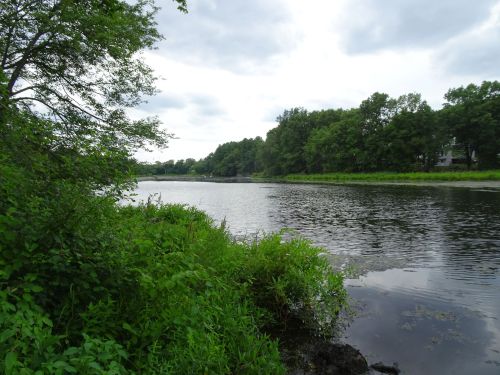 OPen paddling on the river in the summer

We saw very few paddlers on the river, which appears open and calm, at least in July.

From White Pond road, looking towards unpaved section of the trail, headed toward Hudson. River is off to the right

The paved trail stops at the access point to the wildlife refuge at White Pond Road, but there is additional trail that is well-packed dirt, for the most part, all the way to Sudbury Road. This is marked on the map as the continuation of the railtrail, but it has soft sand in some places and lots of rocks still on the trail. Cars are permitted on this section of the trail, at least for now. For more info, http://www.arrtinc.org/ We plan to explore the Wildlife refuge soon, which has a relatively new visitor’s center, with paved roadways that are open for biking, as well as additional trails. The Visitor’s Center, open weekends (with bathrooms!) 10-4, address is 680 Hudson Road in Sudbury, MA, and the refuge was once part of Ft. Devens. For more info about the wildlife refuge, head here: https://www.fws.gov/refuge/assabet_river/

For more about this area