Visiting a Friend, and Looking for a River–the Upper Neponset River, that is

This past week was a time of visiting rivers. I was taking my own advice for finding fantastic nearby foliage and hunting along waterways first to find some great spots to enjoy the colorful foliage season as it begins to show its colors. After visiting the Charles River along various trails, then capturing views along the Blackstone River, I was ready to head in a different direction.

Since my friend Mary’s birthday was last Friday, and knowing she lives right around the corner from a portion of the Upper Neponset River, I combined trips.

First stop, Brian’s Country Greenery on Rt. 140 in Bellingham (near the corner of Blackstone Street)  for some beautiful birthday flowers,

then on to Mary’s for a relaxing visit.

Afterwards, it was time to seek out the hidden Neponset.

I was hoping for some fall foliage along the river, but discovered that the Walpole-Norwood area was behind the Blackstone valley when hunting out fall foliage. Ah well, a reason to return soon! My first stop was the Walpole Town Forest on South Street.

The river is visible right next to the parking area, so I wandered over to the bridge and spotted some trees just beginning to change. We’d just had a good-sized storm the day before, and in fact, this outing was undertaken in a light rain. The river was flowing well, adding to the beauty of the surroundings.

Next stop was on Washington Street in E. Walpole, to the Hollingsworth and Vose company parking lot. I found limited views of the Neponset at the edge of several parking lots on this outing. I poked around some, hoping no one objected to my walking on the edge of their parking lot, but it was difficult to get very clear views of the river.

After lunch in Norwood (“To Beirut,” next door and run by the same folks of Cedar Market, across from the Norwood town common) I headed back south on Rt. 1A. I caught glimpses of water, and apartments that were called, “Neponset View.” Marshy areas behind several businesses are probably portions of the Neponset, but there was only one spot that might have offered me a good view, and there was no signage, just an unlabeled turnoff. Another visit, perhaps.

A friend mentioned that the Neponset flowed behind the Episcopal Church in Walpole center, so I headed that direction. I spotted the river as I drove on West Street, beside Epiphany Episcopal Church.

The river does, indeed, flow directly behind the church, but it is obscured by a chain link fence covered with Virginia creeper. I poked around the parking lot on the opposite bank of the river from the church, avoided the lush poison ivy growing on the edge of the parking lot, and got some views of the river quietly flowing virtually through the middle of Walpole Center, unnoticed.

Neponset along Rt. 1A

The Upper Neponset showed itself once more, on Rt. 1A heading out of Walpole Center.

At this spot there was in fact a sign labeling the river, but it is mostly obscured by foliage. A pretty spot, but not ideal for sustained viewing–the traffic on Rt. 1A is pretty heavy.

It was only a week or two ago that I found walking trails along the Neponset Reservoir in Foxboro, 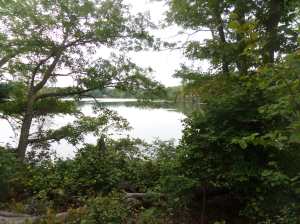 so I am learning about this river system. But in many ways it feels somewhat typical of the  hard-working rivers of this area–put to use for industrial purposes, polluted with industrial waste so the community turned its back on the river, and now deeply hidden behind undergrowth, retail stores, and even pavement.

Searching out glimpses of the Upper Neponset was a pleasure, but there were few spots I could send folks to that would make for an enjoyable extended tromp. I know this was true for the Upper Charles until a few years ago, the Blackstone as well. Maybe someone needs to write a book…

4 responses to “Visiting a Friend, and Looking for a River–the Upper Neponset River, that is”