Fall is here! Foliage in the Blackstone River Watershed 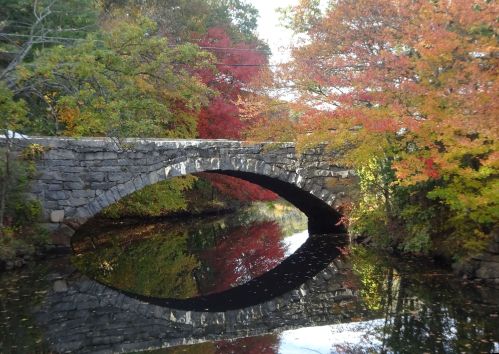 Everywhere we look right now is filled with color. Fleeting, for sure, but when the sun shines, the reds, golds, yellows, pinks and every variation of these bright fall colors fill the woods, and cover the trees along the banks of local ponds and rivers. 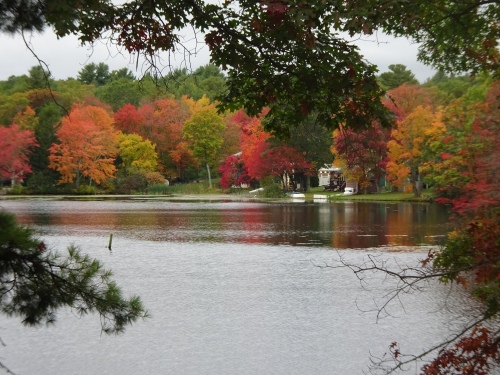 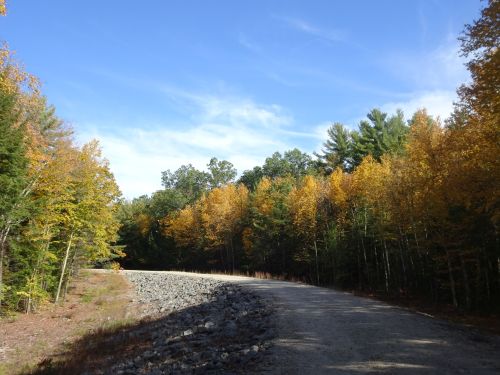 Birch’s fall foliage is lit by the afternoon sunlight on a fire road at West Hill Dam, Uxbridge

Another walk took us to West Hill Dam in Uxbridge, a great conservation area with options for walking, horse back riding, and mountain biking. We spotted a number of recently built trails heading off into the woods, and a number of mountain bikers skimming along the trails before quickly disappearing into the trees. West Hill Dam helps control floods of the West River, another tributary of the Blackstone River. And yes, fall foliage was waiting for us when we ventured outside.

Just down the street from West Hill Dam is River Bend Farm. Many others must have had the same leaf-peeping ideas we did, since the parking lot, as well as much of the farm field was filled with visitor’s cars the afternoon we stopped by. We made a quick stop to take in the foliage at the stone arch bridge, but had to work to keep people out of the picture. Many others clearly had the same plan to photograph the bridge and surrounding foliage.

The next day we set out from Woonsocket to ride the full length of the railtrail from River’s Edge complex to the end of the off-road section of trail at Lonsdale Marsh, about 11 miles.  We incidentally encountered in Woonsocket, near the river, an effort to break the Guiness Book of World Records for most bras strung together. The focus of the event was on breast cancer awareness. After marvelling at so much underwear spread out on the soccer field, we headed south on the bike trail. Each waterfall in turn was a stop, a chance to get more views and share foliage pictures.

Happy day, beautiful foliage along the river at Manville Dam along the Blackstone Bikeway in Rhode Island

First waterfall was in Manville, and the color was bright, despite the cloud cover. As we pedaled south, the clouds parted and the rest of the ride was in mostly sunshine, brightening the foliage on the way. 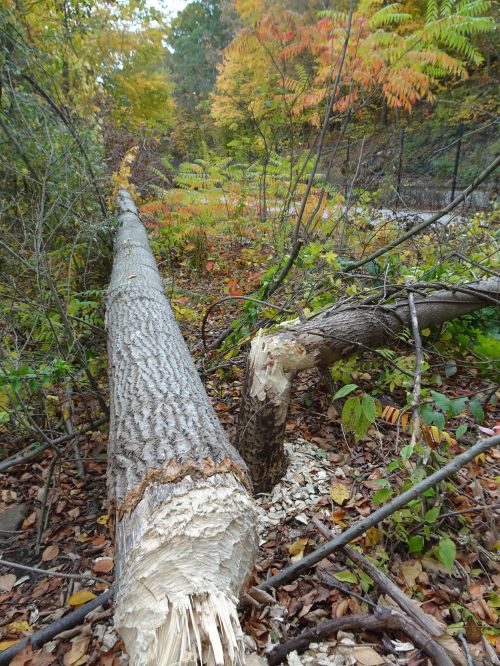 These were large, pretty tall trees, one of which had to be cut in pieces to remove form the bikeway. Busy beavers, indeed

Just before the Albion Dam we encountered signs of a very busy beaver. At least one, if not more beavers had been working very hard, managing to fell at least two large trees, and setting to work on a whole series of nearby tree trunks as well.

Next waterfall was at Albion, with yes, more color.

Foliage was not the only thing that caught our attention during our ride. Several sections of the trail in Cumberland and Lincoln have been in use since around 2000, and tree roots have created large bumps in the trail. These hazards are now painted white to warn travelers, but these sections are slated for repair soon. In the meantime, these bumps certainly focus one’s attention when pedaling along the bikeway.

On our way to Ashton MIlls

Our next stop was Ashton Mills, where we found a spot alongside the river to enjoy a snack, and take in the views of the Mill, and the Ashton Viaduct.

Ashton viaduct, seen from below, along the shoreline of the Blackstone River

The viaduct always takes my breath away. The bike trail travels underneath the bridge, so we got some great views from all sides of this amazing structure. 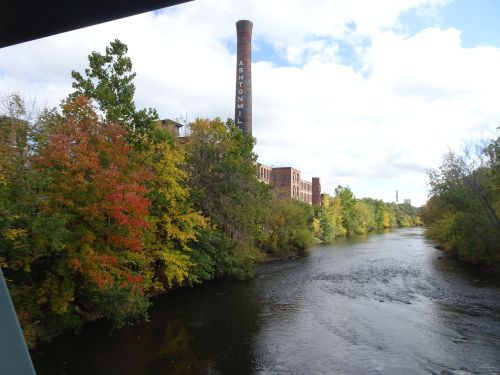 On the pedestrian bridge over the Blackstone River, at Ashton Mills

We stopped a few more times, including a stop at the Pratt Dam.

A quiet fall day along the river at Pratt Dam

We also grabbed a quick picture along the Lonsdale Marsh boardwalk.

And that was the 11 miles of trail in Rhode Island along the Blackstone River. None of the pictures convey the reality of fall foliage. Lucky for us, we are able to enjoy it each year in person. But we keep trying to capture a picture that shows even a hint of the glories of fall. The color will soon be gone, but for now, Happy Trails!