Finding Easy Walks Along the Way in Vermont 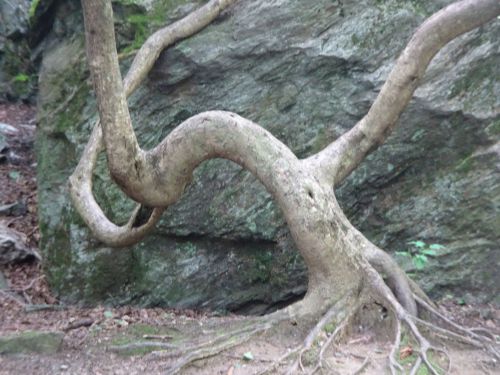 You never know what you might find…just off the road, traveling through Smugglers Notch

As I work on finishing up my book, “How to Find Easy Walks Wherever You Are,” when we travel to unfamiliar places, I am reminded of important points made in the book. These are some of the concepts I have found to be helpful: be willing to explore; be willing to turn around; learn to read maps; use the internet; and tell everyone you are looking for Easy Walks. We used nearly all these principles on our most recent trip to Vermont.

View of the lake from the cottage in Swanton

Since we travel in most seasons based upon weather forecasts, planning ahead is challenging, to say the least. We saw a promising weather window when Vermont would be quite a bit cooler than where we live in Massachusetts, but being August, most places to stay were already booked with summer vacationers.

Taking in the sunset on the shores of Lake Champlain, Swanton, VT

We finally found a beautiful house on the shores of Lake Champlain in the town of Swanton, about forty miles north of Burlington. We wanted to start our bike ride in Burlington on the trail that would cross Lake Champlain, but the lodging in Swanton was lovely, and we fell asleep to the sound of waves every night. However, we did not know the area.

My husband had done some research and learned of a nature preserve, as well as a small rail trail in the Swanton area, so after we arrived, we set out to explore. As we drove, I was reminded that each time we visit a new area, we end up spending extra time wandering, and wondering where grocery stores are. We often end up at hardware stores for needed parts for something, and it all takes time. This visit was no different.

The Missiquoit River, from the trail

We felt our way through the community, and found a spot that looked promising, but didn’t end up with a trail to walk on. We stopped at another spot with a walking trail along the Missiquoit river and started out, but the clouds parted and I soon got overheated, cutting our walk short. 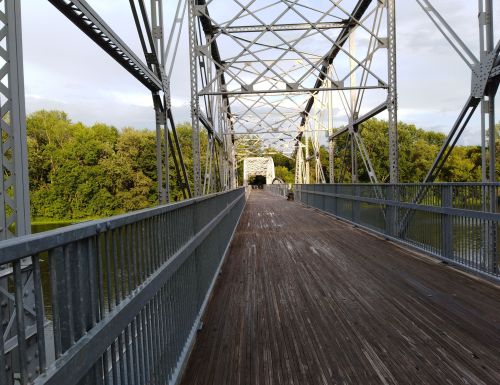 After dinner at a local diner in Swanton, we drove past a sign noting “Recreation trail” and stopped to investigate. The foot bridge over the river was inviting, and led across the river to a one mile paved walking path through the woods. Nothing terribly exciting, but bridges are always cool to walk over.

Winooski Falls, in the town of Winooski, where there is a handicapped walkway along the banks of the river

As we left Burlington after our bike ride across Lake Champlain, we crossed the Winooski River, and spotted some steps (with handrails!) leading down to the river. We discovered Winooski Falls park, a town park in the town of Winooski. 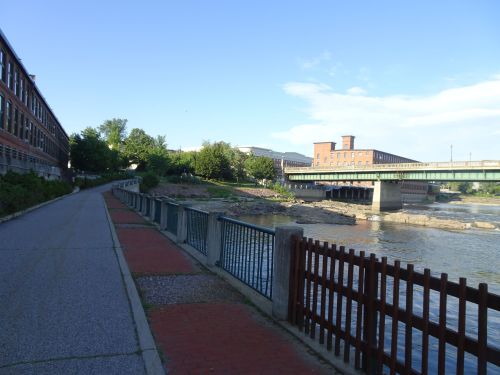 The handicapped accessible path leads from street level down to the river, and follows the river downstream for perhaps a quarter mile. As we walked along the path we discovered a hydroelectric station and dam. The dam blocks migrating fish, but diagrams detail how each spring the fish are caught and transported upstream around the dam. 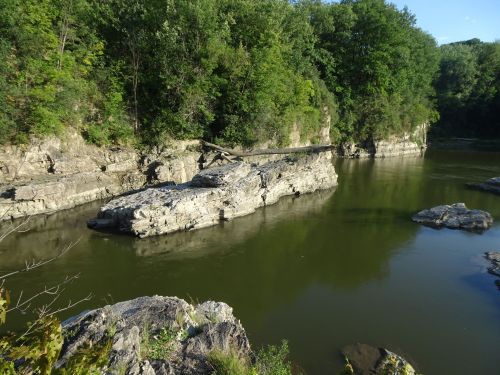 The rock formations created by the flowing river as it cuts its way downstream were gorgeous, offering a sense of wildness within a very short distance of downtown Burlington, Vermont. 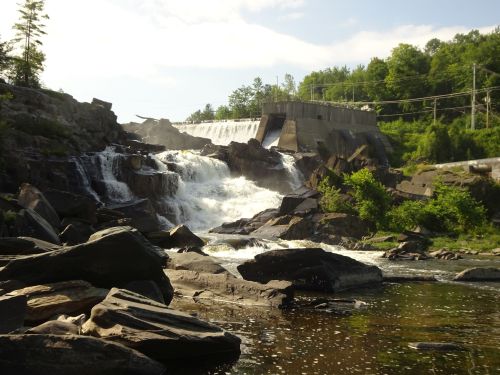 This waterfall was too big to capture it all in one photo.

The two days of our stay focused on the Island Line Railtrail that crosses Lake Champlain, but as we left the area, we headed to Stowe on our way home, hoping to ride on the Stowe bike trail, which offers views of Mount Mansfield. My husband noticed a notation he had made years ago on our map, of a waterfall (with hydro-electric dam) along the way on Rt 108. We found the waterfall, stopped for pictures, and spotted a trail on the other side of the waterfall.

Just below the waterfall, the river is littered with debris broken off by the torrent of water that flows over the falls

A little poking around revealed a steep dirt road down to a fishing area just below the waterfall, so we got even more photos.

As we wound our way through Smugglers Notch in the Green mountains, we spotted huge boulders by the side of the road. Well-trampled paths between the boulders suggested we might be able to get closer views on foot, so we stopped.

Feeling dwarfed by the boulders near the road

I needed help getting over some of the roots and rocks, but found most of the pathways between the rocks to be manageable.

The natural spring has been walled off to create a small pool. The water flows out of the pool and begins its way downhill in a series of small waterfalls

Just downhill from this high point of the road, we stopped at a natural spring, and with help I got close to the spring and savored the sight of the overflowing water, which transformed into a small waterfall that flowed down the side of the mountain.

We opted to drive to the top of Mount Mansfield rather than take in the views from the bike trail, confirming yet another point I make in the upcoming book, “How to find easy walks…” That point is, “be willing to change plans!” especially when you discover in your exploring something that looks really intriguing. You just never know what you might find. Happy trails!