Liz (on the left) chats with St. Vincent’s staff prior to the start of the program

My friend Liz Myska is a force of nature, some folks say. She makes friends wherever she goes, and is amazing in her ability to persuade others to help with her great ideas. Five years ago, she wanted to combine offering a safe place to walk in the winter with an opportunity for her and her other visually impaired friends to help people in the community learn how to better assist those around them who are visually impaired. Five years later, her winter walking program continues. These winter walks have all taken place at St. Vincent’s Hospital, Worcester, taking advantage of their amazing, three story atrium, complete with a three story waterfall, live trees, flowers in season, and comfortable seating near the waterfall.

View of the waterfall from across the way

I have participated in several years’ worth of programs, and have met numerous visually impaired people (VIPs) in Liz’s words. Medical students have participated, regular college students who simply wanted to learn what the program was about, and Liz has gotten legislators, and community activists involved. Today, she brought in some St. Vincent’s staff members, to help them better understand the program that has been happening right in their facility. The hope is that as staff at the hospital grasp the opportunity afforded to learn from this unique program, more people will make the time, arrange their lunch hours, or do what they can to participate.

Saris enjoys the sounds of the waterfall, but she does NOT like the pebbly surface of the walkway next to the water. “My cane bounces all over the place off that surface,” she explained.

I was teamed up with Saris, a native of India, who doesn’t need me for a guide, but graciously allowed me to walk next to her, her arm tucked under my elbow, as we walked the length of the atrium. We had met before, so our conversation picked up from past walks. As we walked and talked, we soon learned more of our family’s stories.

Learning, for a short while, what the world feels like for the visually impaired

A St. Vincent’s staff person donned a face mask and carried a white cane, to allow her to experience, with a guide, a little of what the visually impaired world feels like. As she whipped off the mask at the end of her walk, she expressed relief, and amazement at all she had been taking for granted.

Another woman shared the story of her blind college professor who insisted on students guiding him from class to class, even though he didn’t need their help. “He wanted to teach us how to be helpful to those with vision challenges,” she explained. “So I ended up teaching in special ed for many years, and now I take visually impaired people shopping. I’ve been to so many stores, shopping this week, that I’m getting to be a great shopper.”

Hanging out at the waterfall after walking

After walking, we gathered  at one of the tables near the waterfall, the water cascading into the pool directly behind us. The topic of food came up (of course!) and we soon learned from Saris that most Indian cuisine, here or in India, offers vegetables that are way overcooked. “I like my vegetables crispy,” she declared. From there we headed into the world of picky eaters, and my own struggles with certain foods were soon out there for all to know about. Liz related her struggles to separate egg whites when she was younger, in her quest to make a great angel food cake. “I thought it was good, the cake was always gone by the time I got home from school,” she said. “My sister later told me it was so awful they threw it out so I would think they had eaten it!” I shared my camp experience of learning to take “Girl Scout” bites, or “no thank you” helpings, and the group laughed at the story of my dilemma, when faced with an unexpectedly large “girl scout bite” of a hated food I was sure I would never be able to finish. But as I pointed out, I was not still sitting at that camp table, so something must have happened, but the rest of the story has been wiped from my memory. 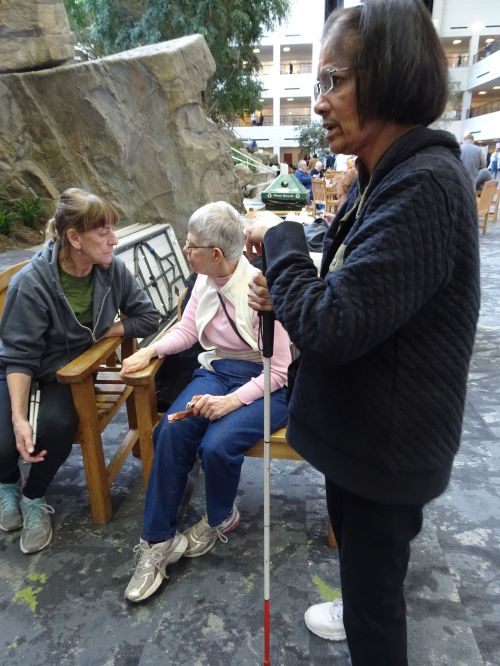 Too soon, we all needed to head on with our day, and our goodbyes with sprinkled with heartfelt hugs and hopes to see each other again soon. The Walk-fit  program continues Thursdays at 12:30 and Saturdays at 10AM, until February 23rd. To join, simply come to the downstairs atrium, and start looking around for some folks with white canes. Walk up, say hello, and let them know you’re there. They may not be able to see you, but they will hear you, give you a big smile, and will make sure to include you in the fun. Walking and talking with Walk-fit. A great way to spend an hour or so. And yes, even if you’re talking to someone who is visually impaired, it’s ok to say, “See you there!”