Make Your Own Story Book Hike-Riverbend Farm in January

Working collaboratively is such an exciting experience. I’ve found that ideas bubble up when I open myself to others’ ideas, listen to what another person has in mind, and together we come up with something I’d never have thought of on my own. That may have been what happened when I met up with Kathryn, who works with programming at Riverbend Farm in Uxbridge. She had offered this program before with a different name, targeting a different population. By the end of our walk we were both excited to plan a series of hikes that would invite parents and children, as well as older folks, to come take a walk together, then return to the visitor center and create a story book from what they observed.

Years ago I read a book by, or took a workshop from (too long ago for me to recall clearly) with Vivian Gussin Paley, a respected early childhood educator. Paley was well-known for incorporating storytelling into early childhood education. An idea she wrote about was to have pre-literate children narrate to the teacher a story, which the teacher would then write down and read to the classroom. I had always been intrigued by this, but had few opportunities to put her ideas into action. This event also felt inspired by what I had learned from her all those years ago.

Thanks, Angie Stormont, for creating such a great flyer to help get out the word

Kathryn and I, along with Angie Storment, who created a beautiful poster for the event, spread the word. The weather was iffy right up till the morning of the program.
The last few showers fell just prior to when we had planned to start, at the tail end of a massive rain storm. We found the tow path along the Blackstone Canal to be ice free and dry. 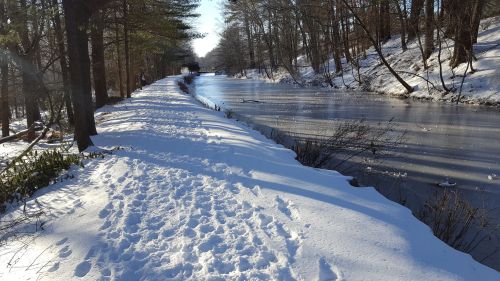 The day before our hike, the trail was ice/snow filled, the canal frozen solid

Just the day before, the trail had been filled with snow, with possible slippery conditions. But when I arrived before the program, Kathryn and I walked the trail and agreed the conditions were safe. The program was on.

Note the uplifted plates of ice in the canal

The rainstorm had flooded the Blackstone canal at Riverbend Farm, submerging sections of the ice, cracking the underlying ice into jagged plates. The rain depressed portions of the ice while uplifting other sections that had been frozen solid  by the arctic air of the past few weeks. I felt like I was witnessing a real life geologic demonstration of tectonic plate uplift.

At least one hapless fish had suffered a terrible fate as a result of the massive uplift of ice in the canal. In the middle of the canal lay a fish, stranded on top of the ice, gasping, and clearly still alive. The canal walls are steep, and the ice on the canal was extremely unsafe. Kathryn and I shook our heads at our inability to help, and reminded ourselves of the circle of life. Hoping a hawk or crow would come by soon to relieve the fish’s suffering, we returned to the Visitor’s Center from our pre-walk survey of trail conditions.

Back at the Center, we gathered, over thirty people in all. Lots of very young children came, and some older kids, all with parents along. The description of the event noted that parents were expected to assist those who could not yet write, allowing little ones, at least those who were verbal, to dictate a story of some sort, to create a book.

My friends Liz and Peg, who are visually impaired, also joined us, along with Peg’s seeing eye dog. They brought along their friend Jack, who sees just fine, and did the driving for them. Jack provided support along the trail as well. 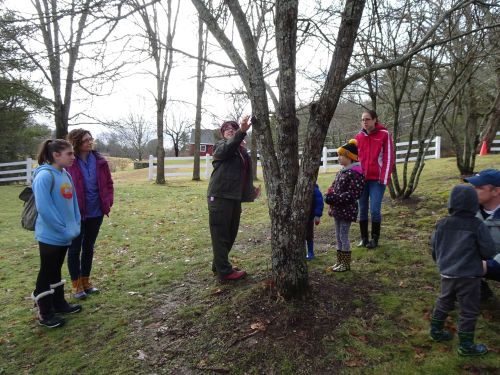 Kathryn took the lead as we headed out behind the Visitor’s Center, allowing for late-comers to catch up with us. We checked out a nearby tree riddled with holes created by hungry yellow-bellied sap suckers. Kathryn then showed us a nearby maple tree with holes created by the park staff, done for the purpose of tapping the tree for its sap, to make maple syrup. 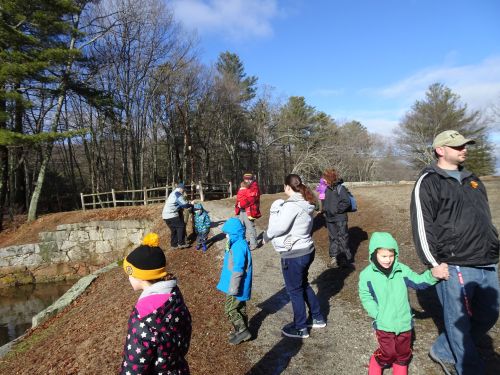 Checking out the trail

With over thirty folks in tow, we straggled over to the bridge and on to the tow path. A small child peered into the canal and observed, “This looks like an ocean, Mommy. A chocolate ocean.” None too appetizing at that, but fun to hear what these little ones were observing on our adventure.

We headed to the stone arch bridge at the top of the tow path. The dam, along with one of the many locks that once allowed for transit through the canal system from Worcester to pawtucket, RI., is often a rather quiet spot. Because of the recent rains, the river roared past the dam, churning the water. When I checked to make sure my friends Liz and Peg were getting a chance to hear the waterfall, since the visual aspects of this outing were not available to them, Liz laughed. “We heard the roaring of the water way back there,” pointing back to the bridge near the visitor’s center.

And this was when all the children spotted the stranded fish. Sigh. The fish was still gaping its mouth, still suffering. Parents saw their children’s distress and wanted to fix it. One parent nearly slipped into the canal. Thankfully he got his footing and backed away from the water’s edge. Another parent found a long, large branch, approached the ice chunks from the opposite side of the canal, where it was less steep, and pushed the ice floe on which the fish was struggling over to the other side of the canal. Using the same branch, this same parent came around and flipped the fish back into the water. The fish was saved. 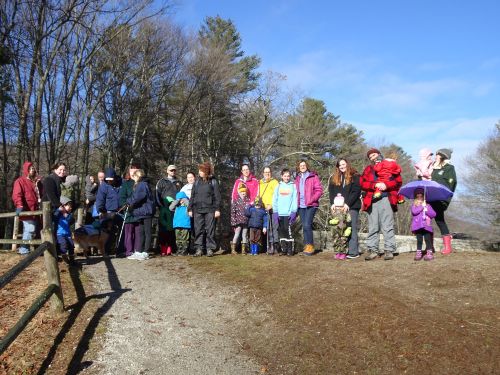 After a few more glimpses of the rushing river, we stopped for a group photo.

Ice free tow path, headed back to the Visitor’s Center

Now it was time to head back to start writing!

Tools of our trade

At the Visitor’s Center Kathryn had provided all the needed craft materials–paper, colored pencils, markers, crayons, rubber bands and small twigs. Twigs, you say? Well the twigs became an essential part of the “book binding” material, holding the folded paper in place with rubber bands. 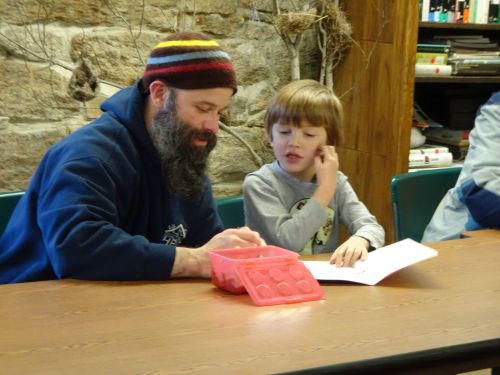 Working together as a story takes shape

We piled into the Visitor’s Center, shrugged off our jackets, hats and mittens, and got to work. Parents and grandparents soon were engaged with their children,

The story has begun

some kids being clear about the story they wanted to tell, 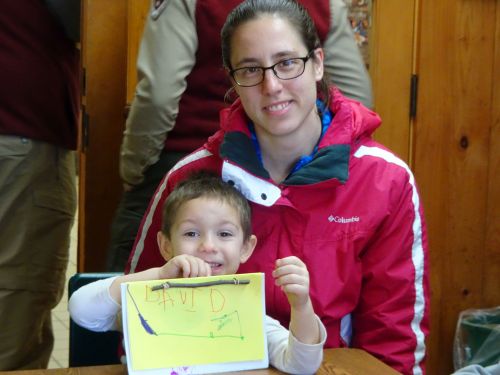 Yup, a story comes in all shapes and sizes

My visually impaired friends teamed up with Carol, whose daughter was quite capable of writing her own story. 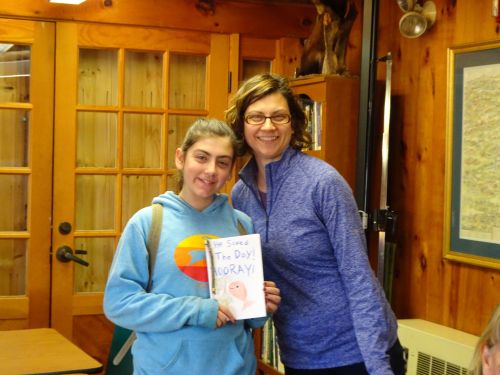 Carol and her daughter, who created her own book without help

Carol and Liz and Peg created their own book, and last I checked were making plans for other adventures together.

Kathryn commented that she heard a lot of laughter coming from the room, as she tended to other duties.

Getting the story down…with help!

I mostly kept an eye on things and took loads of pictures. 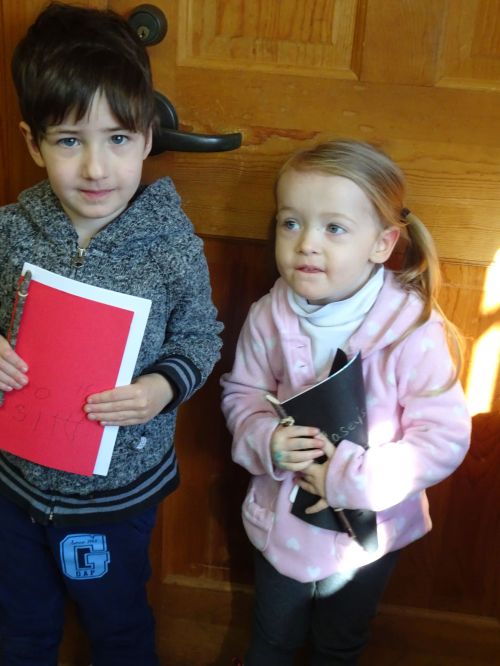 A few children, when asked to pose with their books for my pictures, were more intent on polishing off snacks some wise parents had brought along, but eventually we got them to finish up their snacks and then they were quite willing to smile for my camera.

My heart was full as I drove away. 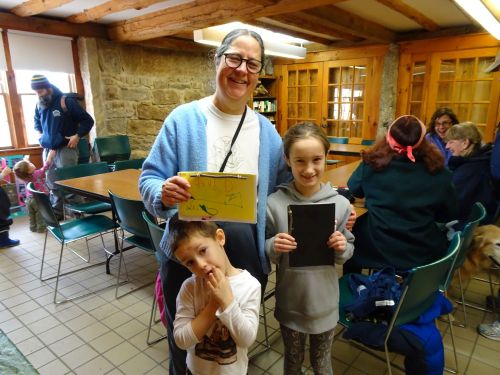 Getting my grands here, with their mom’s help, added to my joy

This program took my love of writing, combined with my hunger for the outdoors, along with the many years I worked as a storyteller, and rolled it all into a successful program that was supported fully by Kathryn and the Riverbend Farm park staff. Thanks so much to everyone who showed up and participated. We have more of these scheduled. We look forward to having  Blackstone Heritage Corridor Volunteers in the Parks (VIPS)  as part of the program when we offer it again, Feb. 21, Wed. 10:30AM (School vacation week), also at Riverbend Farm. Till then!

Marjorie Turner Hollman is a personal historian who loves the outdoors, and has completed two guides to Easy Walking trails in Massachusetts, “Easy Walks in Massachusetts 2nd edition,” and “More Easy Walks in Massachusetts.” A native Floridian, she came north for college and snow! Marjorie is a Certified Legacy Planner with LegacyStories.org, and is the producer of numerous veterans interviews for the Bellingham/Mendon Veteran’s History Project. http://www.marjorieturner.com