In years past rivers were viewed as convenient dumping grounds, a quick way to flush away unwanted…everything. The past 30 years has brought a sea change in how cities and towns value their watersheds. But a challenge remains. A lot of the infrastructure of local downtowns for the most part blocks, or turns its back on their rivers. The rivers were a big part of why the cities grew up where they did. Attleboro, MA is no exception.

The Ten Mile River and Bungay Brook, which feeds into the Ten Mile River, flows right through the heart of downtown Attleboro, but my guess is that few motorists have seen little, if any of this river as it wends its way through the city. I was in Attleboro for a Meetup lunch today, and was glad to see that the parks I wanted to visit were just down the street from where I was having lunch. 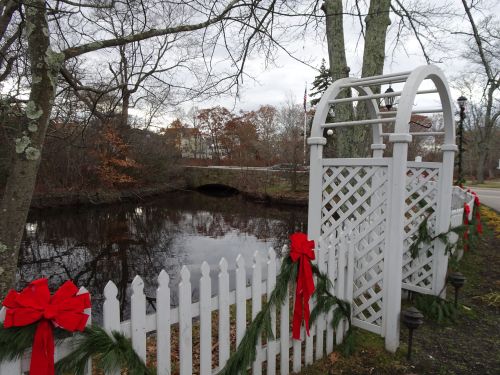 View of the Ten Mile River (and Rt 152) from the Col. Blackinton Inn parking lot.

It was only when I came out after lunch and looked around for my car that I realized that I was staring right at the Ten Mile River as it flowed directly next to the Col. Blackinton Inn.

Small park (and the Ten Mile River) directly across the street from the Col. Blackinton Inn

Across the street from the inn is a small, apparently unnamed  park with picnic benches and more views of the river. 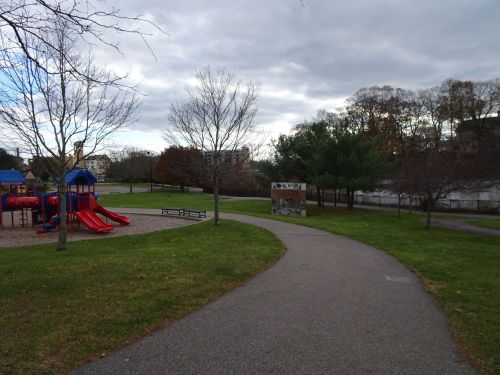 View of the Balfour Riverwalk

I recruited some of my new friends from our Meetup lunch and we headed over to the Municipal parking lot directly next to the Attleboro Public Library. From there we walked to the adjacent Balfour Riverwalk Park, not too surprisingly, also right on the river.

Bridge over the river from Balfour Riverwalk, connecting travelers with a path to the Community Gardens and Larson Woods

We planned to walk along the river as far as Larson Woods, so we crossed the Balfour Riverwalk, used the convenient bridge to get us over to Hayward Street, and found our way along to the Attleboro Community Gardens. 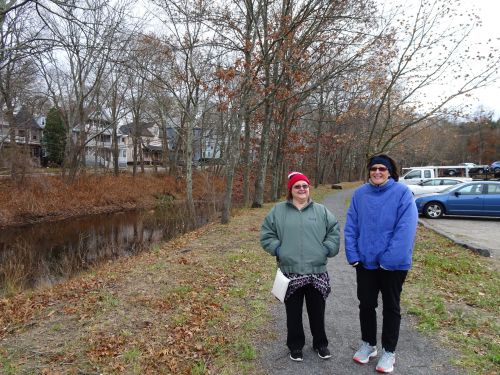 Strolling alongside the river at the Community gardens

There we found a clear graveled path alongside the river, and followed the river up Hayward Street to the Thomas E. Willet School just up the street and spotted a rocky spillway/dam/waterfall.

We’d arrived at Larson Woods, a small piece of Attleboro Land Trust open space property that provides access to the river. We had several paths to choose from, but the trail closest to the water turned out to be the easiest, and safest footing.

We  headed back but took the time to circle Balfour River Park before we finished up our walk. The river has been channelized through this downtown portion of Attleboro. Poured cement walls, stone foundations of buildings that front onto the river and bridges make access to the river difficult. But it’s there, and the Community Gardens and Larson Woods probably provide the prettiest views along this section of the river. Besides the municipal parking, which requires a small fee, the parking at the Community gardens is probably the best choice for a good place to park to enjoy this downtown riverwalk.

The Ten Mile river flows past yet more industrial buildings at the Judith Robbins Riverfront Park, headed out of town

From Balfour Riverwalk Park it is just another block down Rt. 123 to Wall Street to pick up the river again at the newest park in town, the Judith Robbins Riverfront Park, across from the commuter train station parking. Ample parallel parking lines the street alongside this linear park, which offers great views of the Ten Mile River.

And so my on-the-ground research continues as we inch closer to making the next book, “Easy Walks and Paddles in the Ten Mile River Watershed” a reality. We’re getting down to details, confirming where it’s safe to park, making the connections between various parcels of open space. What a pleasant surprise to discover how easily we were able to navigate from one spot along the river to the next. Hidden in plain sight, as it were, the river continues to flow to the sea.

The river is much easier to find these days, thanks to the efforts of many to clean up the river and create accessible trails nearby