The Burren Way and other Easy Walks-Ireland 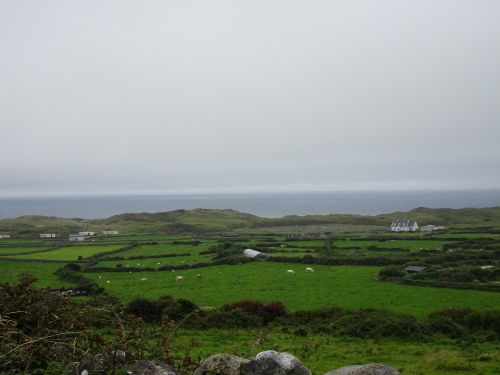 View of the landscape and the ocean from the Blackhead trail, part of the Burren way

We spent almost our entire visit in Co. Clare, which is known for its karst features–limestone landscape that reaches all the way to the shore in many areas. My husband has a passion for caves and karst is where you’ll find caves (created from dissolving limestone). But this is also extremely rugged landscape and so finding Easy Walks for me to enjoy was a real challenge. Thankfully, many feet have trodden these paths before us, and it was a matter of discovering where those paths were, and where we were welcome.

The Burren Way is somewhat akin to our Bay Circuit Trail in Massachusetts–a series of walking paths connected by on-road walking that links the trails together. On the map the trails seem pretty apparent. 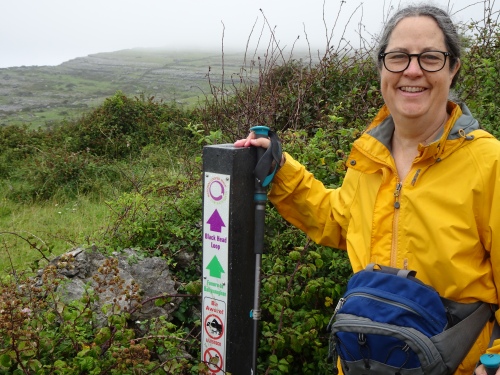 On the ground the reality is pretty different. We spotted Burren Way signs at various locations, but when we looked for the actual trails, signs had curiously disappeared. What we heard from locals was that neighbors have mixed feelings about visitors, and have removed signs that might have been helpful in discovering where the trailheads are. Ah well, it is all an adventure!

One of many gates along the way,

We found a link to the Burren Way-Blackhead Loop, at the end of a dirt road–the trail markers confirmed that we were, indeed, on the right path. The stone stile was probably the biggest challenge for me, but we managed to climb over and onto the path. Along the way we encountered various gates, and passed along through active pastures, always remembering to close the gates behind us. 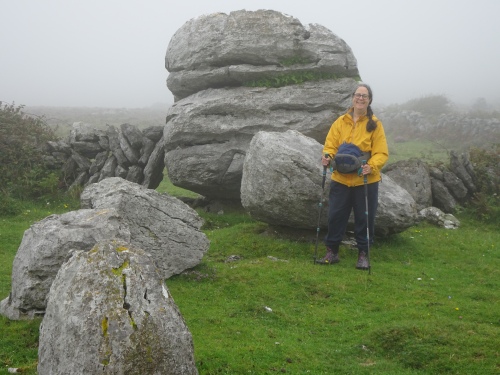 The fog was closing in, but the stone walls kept us on the path

Stone walls on either side of the trail made the path clear. We slowly climbed into the fog, losing our view of the hillside and the ocean just below us. When my stamina ran out we turned back–there were many more miles that fellow travelers could go, but I’d reached my limit. 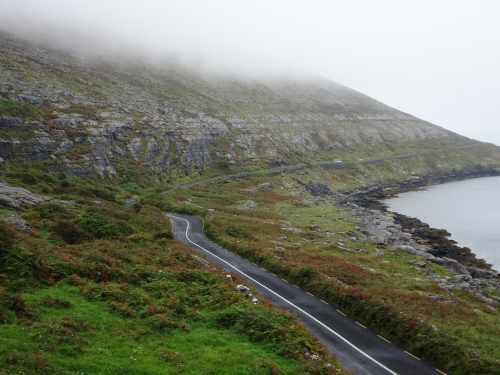 View from above–karst reaching down to the shore, low clouds in the heights. And yes, the road has stone walls on both sides, hidden by greenery…

As soon as we got back down to lower altitude the path cleared, and we realized we’d been walking in the clouds. Below, the sun shone and the sea sparkled. The views were magnificent. Countless stone walls lay across the landscape.

Besides the official Burren Way, we found multiple other farm tracks that were welcoming. We learned that the key to look for was a sign that said, “close the gate.”

Clearly travelers were expected, and courtesy while visiting was expected as well. If we encountered a sign that indicated dangerous farm machinery was present, and/or that entry required contacting the landowner, we took a different route.

While within the limestone area, surface streams are rare–the limestone is so porous water commonly sinks below the surface. In fact, obtaining water in the area is a real challenge–thus the value of the small springs we came across.

The Caher River, in contrast to all other streams within the Burren, remains a surface stream for its entirety, reaching the sea at Fanore Beach. We took the single lane road that followed the Caher river to see what we could see.

We soon encountered three large cows in the road, enjoying the greenery they had discovered along the roadside. We thought to drive around them when suddenly a car came up behind us tooting its horn. “Good luck!” we thought as he maneuvered in front of us, but it turned out this was the cows’ owner, and we watched in astonishment as he slowly herded his cows, by car, back up the road to their pasture. They took their time. We followed slowly, stopping occasionally to grab some more pics of the Caher river which cascaded down the hillside we were slowly, very slowly climbing.

We were in no rush; clearly the cows were not either. Once safely tucked back in their pasture we headed on our way, eventually reaching another section of the Burren way that climbed several mountains in the area. 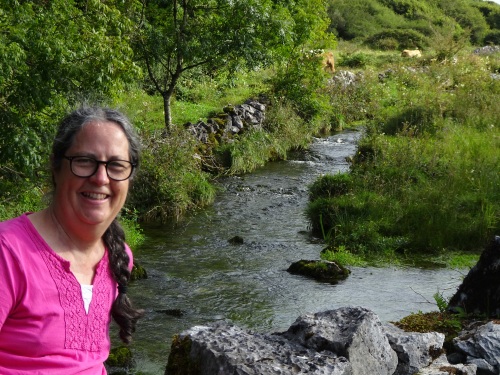 Alongside the Caher River

We found a spot to park, then walked on the road/trail down to a bridge over the Caher River. Were my stamina greater we could have walked up the track that continued to the top of the neighboring mountain. The trails are there, and many have gone here before. It’ s the finding them that takes some looking.

Our last full day took us to Co. Galway, on our way to the Connemara Mountains. This area offers several large lakes, and in summer one can take an extended boat tour out to an island with a castle. Our time was limited so we passed on the boat tour of the lakes. but another time…

Lovely riverside park near Galway. The nut trees are already changing–fall is coming.

As we moved out of the karst landscape we found more surface streams. One lovely park right outside of Galway City offered a short walk alongside a river.

Once we got to the mountains we discovered that Easy Walks were hard to come by. The steep mountains were dotted with sheep. The one marked trail we found offered an extremely unwieldy wooden stile, allowing nimble visitors to climb over the fence. These were higher steps than I could manage. We stopped at what looked like another inviting spot, noting a small waterfall on the slope nearby. We soon discovered the ground was nearly waterlogged, and each step threatened to suck our boots off. Losing one of the rubber tips off my walking stick was a small price to pay. We headed on. 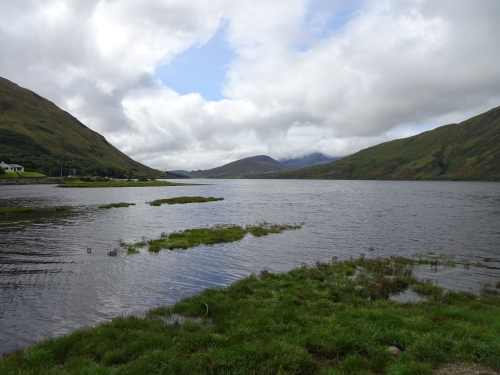 We reached the Killary Fiord too late to take the 90 minute boat ride that is offered to visitors in good weather. A lovely spot, and we were sorry to miss the chance to travel through this waterway between the mountains.

Success! An Easy Walk in the Connemara mountains, alongside a rushing stream

As we headed back through the mountains, right outside the small town we’d found at the head of the fiord, we spotted a sign on a farm gate–“No dogs.” Well, we had no dog with us–this looked about as welcoming for walkers as we could expect! Parking carefully so as not to block the gate, we climbed out, and found the perfect spot for an Easy Walk in the Connemara mountains. The steep hillsides reached up on either side of the track we walked.

Intrepid sheep alongside the rushing stream

A swiftly running stream cascaded down the hillside next to the trail. The sheep nearby noted our presence, but had no interest in anything beyond the tufts of grass they found near the water and along the hillside. The sun was getting low and we had no wish to navigate the twisty road through the mountains after dark. We headed for home. 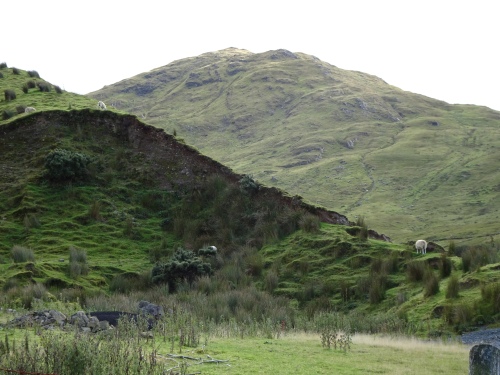 Parting view of the Connemara Mountains

3 responses to “The Burren Way and other Easy Walks-Ireland”