In search of the SNETT 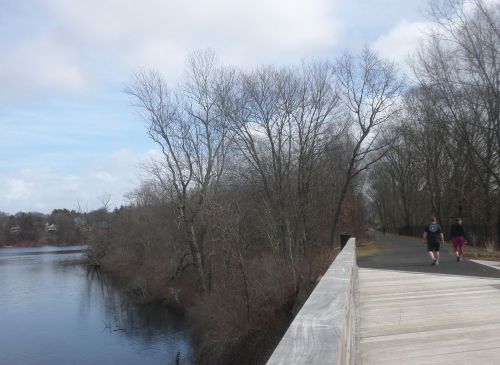 View from one of the Bridges along the Blackstone River Bikeway/SNETT. This completed 4-mile portion of trail encompasses both the north-south railtrail, as well as the east-west SNETT.

With the recent completion of the Blackstone River Bikeway–at least the four mile section from Blackstone through Millville and into Uxbridge, there is renewed attention, and great interest, in seeing these kinds of projects move forward. The East-West SNETT (Southern New England Trunkline Trail) intersects with the north-south Blackstone River bikeway for these four miles of railtrail.

The SNETT has received a lot of press in the past several years as different community groups and public officials seek to assist in the development of this 6-town linking railtrail (from Franklin to Bellingham, Blackstone, Millville, and Uxbridge, out to Douglas)but it’s been a slow process. Twenty years ago I attended meetings that talked about the project, and there was interest then, but no leadership. The concept remained just that–an idea, but not a reality. Since then all the rights-of-way on the entire proposed SNETT have been restored, paving the way for the SNETT to become a reality, but much work remains. 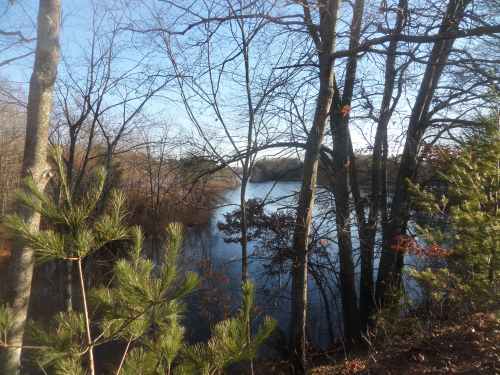 View from the SNETT, overlooking the Woonsocket side of Harris Pond

The path of the SNETT is pretty clear in both directions at this point. However, the path of the SNETT itself has been fenced off. A much smaller path next to the fence, along the raised railbed above Harris pond, heading back toward Bellingham, is manageable. Along this narrow path we got great views of Harris Pond in Woonsocket, RI, a reservoir for the city. Despite its reservoir status, the pond is ringed with houses on the Woonsocket side of the pond. The SNETT acts as a diving line between the two sections of the pond, and apparently as part of the state boundary as well.

The Blackstone side of Harris Pond couldn’t have looked more different. No houses–none, along the water. Trails ring both sides of the pond.

Open trails in a former gavel operation next to the pond.

We walked along the western shore through what appears to have been an old gravel operation.

We spotted signs of recreational vehicles, and saw several riding on the SNETT.  Otherwise, this is a quiet area with wonderful views of the pond. Until recently, I would have said Harris Pond was a spot in Woonsocket. Now I know it is a quiet, hidden spot in Blackstone as well. The only “no trespassing” signs we spotted pertained to the Woonsocket side of the SNETT, referring to the reservoir. Despite this being a reservoir, many houses along the pond have docks, canoes, and clearly use the pond for swimming.

In Blackstone, Harris Pond has no homes next to the water, but the large ropes dangling from trees at the water’s edge speak of warm summer afternoons and teens seeking out a place to cool off and have fun.

Crows gathered at the waters edge at Harris Pond

A huge flock of crows wheeled about in the sky while we walked, calling loudly to each other. They finally settled into several trees on the opposite side of the pond from us.

We intend to return to this area to explore more, and wonder how many years will pass before this proposed trail system becomes the reality that has been hoped for.