Do you need a gift for your grandchildren? 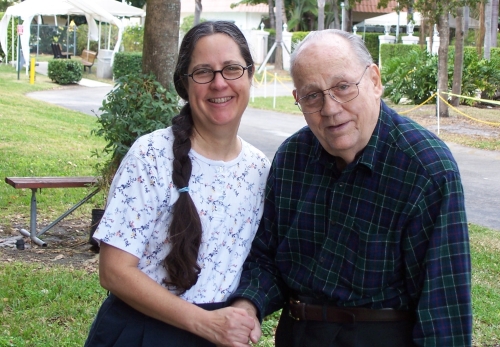 Here I am with Dad, ready to work on his stories

As our parents age, we often fret about “What do you give someone who has everything?” But there is another side of this equation. What does an increasingly frail elder have to give when getting out is more difficult? Money may be in short supply, energy is diminished; in short, elders often feel increasingly like they have nothing to give.

My dad’s hands became increasingly crippled with arthritis until his writing was reduced to an unreadable scrawl. One day he told me that his bank had contacted him. They were unable to read the handwriting on his checks. This information prompted a number of changes in our family, not the least of which was my brother taking over responsibility for making sure Dad’s bills were taken care of.

But as I talked with Dad I also heard him bemoan the fact he had nothing to give anyone for Christmas. He’d always written checks for grandchildren, and now this was something he was unable to do.

“Dad, you do have something to give your grandchildren—you have our stories! And I’ll help you write them,” I told him. This was years before I’d heard of personal histories, but I’d written for newspapers for years, and knew how to conduct interviews. We lived many miles apart, but on my next trip to visit him, I brought pen and paper and spent the weekend asking Dad questions. He basked in the attention and happily answered my every query.

Dad in uniform, in the Army during WWII

Since I was a journalist, I wrote up Dad’s stories like an interview, in third person, and sent the stories to all our extended family, Dad’s Christmas gift to them all. The next year, Dad and I worked together to collect more of his stories, which we again shared with our family.

And then I discovered the world of Personal History. I realized that Dad’s stories were a treasure trove. But when I shifted his stories into first person (from “he said” to “I told them,”) I saw that the stories lacked detail. More specific information would enrich his tales. Dad and I began a third round of storytelling, and I arranged his stories into chronological order. The more I learned, the more questions I had. Dad was ready with answers to each question. 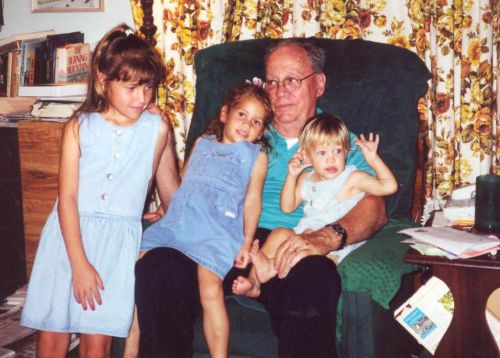 Grampie with a few of his twelve grandchildren

I brought the nearly finished manuscript to Dad to get his OK. My brother and his four teenage and slightly younger kids were visiting. Dad saw his grandchildren read through the manuscript. “Are you done yet? Are you done?” they asked as they waited in line to read each next chapter. Dad saw his grandchildren’s excitement, and finally looked over to me to ask, “You’re really going to make this into a book?”

“Yeah, Dad, I am” I replied. He nodded his approval.

The book was nearly complete when my sister handed me a box. “Some letters of Dad’s are in there,” she said. “They’re kind of mushy. You might want to read them.” Dad’s courtship letters to Mom filled the box, from the day they met till the week before they married, a year later. Every letter nestled in its original, dated envelope. In assembling the letters in order, I gained a clearer picture of my parents’ life. The letters even provided some information about an unsolved murder in the family that had never been talked about. Needless to say, the completion of Dad’s book was delayed while I worked through transcribing the letters and piecing together as much as was possible the details of dad’s uncle’s death.

Mom when she was in college

When I brought Dad his letters to Mom, I hoped he’d allow me to share them with our family. He sat up all night rereading the letters. The next morning he said, “It was as though I was back in my room sixty years ago, writing to your mother.” Mom had died a number of years before, but he’d never stopped missing her. For one night, these letters allowed him to feel she was still in her dorm room at college, and they were just months away from starting their life together, a life they shared for fifty years. 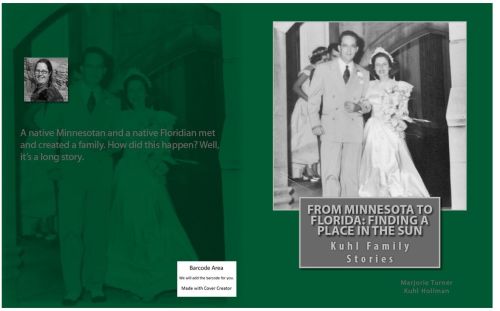 Dad lived long enough to see “his book” published and shared. Indeed, he had a lot to give to his children and grandchildren. It took some support and willingness on his part to share his stories. In that last year of his life, he was able to see that his experiences, his life lessons, and his wonderful sense of humor were of great value. And we, his family, are so much richer for the investment he made, in giving us his stories—himself, in his voice.

There is a real power in knowing we have something to give. Life can take so much away from us as we age, but our stories—what a most precious gift to pass on. It may take some support to make this gift a reality, but all good gifts are like that—some work, but oh, worth the effort, for sure!

4 responses to “Do you need a gift for your grandchildren?”