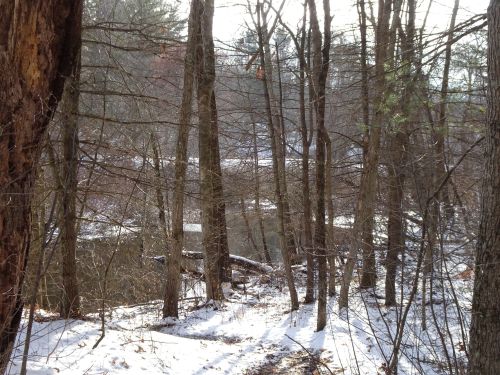 Views of the Charles River, from the slope above the river.

The blue sky this morning was so inviting, but between a husband with a sore throat, and family and friends with lots of holiday plans, it was after lunch before I tracked down a friend who could join me on the trail today. Yes, it was clouding over, and yes, the trail was icy, with just a light covering of snow disguising the ice along the trail. But the company was good, the wind of the past several days had died down, and where we needed to turn around we got our reward, which was some nice views of the Upper Charles River as it flows quite near the downtown of Bellingham.

Because of industrial development in years past, the river is nearly invisible as people drive south through Bellingham on Rt. 126. A small sign just north of the center offers one of the few hints that the Charles is making its way slowly through Bellingham, on its way to Boston. Yet where we walked was just a short distance from the thousands of commuters and area residents who travel daily through this area. 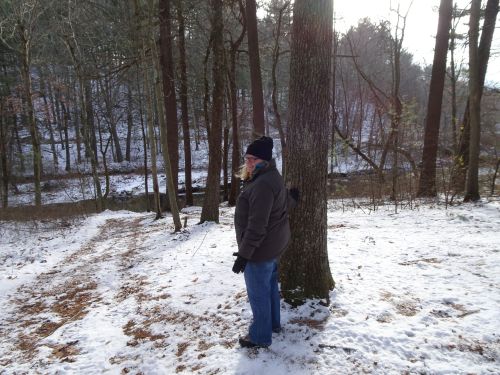 Christine got closer than I would, but we both chose not to risk sledding into the river.

When we reached the end of the trail that began behind the High Street athletic fields, we had clear views of the river. The ground slopes down steeply to the riverbank at this spot, so because of the ice, we admired the river from afar.

This is a short walk, one mile round trip, but there were challenges along the way. The first was the intermittent stream near the trailhead. Rather than take the footbridge over the stream, I chose to walk over the snow, which looked like it covered the dry streambed. Wrong! My boots broke through the ice and we found water underneath the ice–quite shallow, but it was a good thing my boots were waterproof. 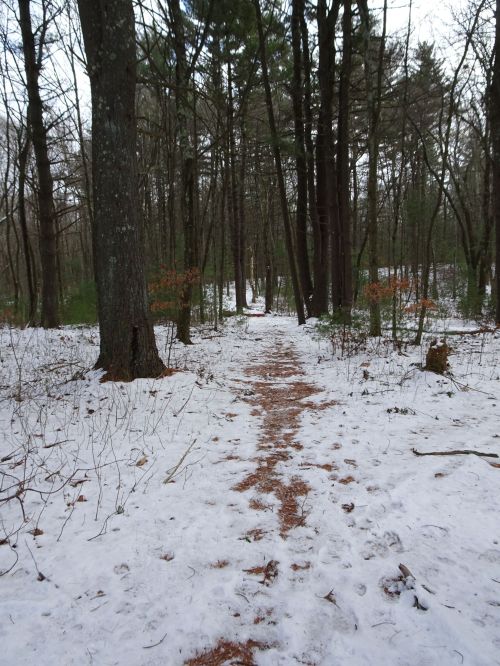 The dusting of snow offers the impression the trail conditions are fine, but there is ice all along the way.

There is a small footbridge over the stream, build as an Eagle Scout project by my friend Sean Boddy. Built without a ramp to discourage vandalism, I find it a little challenging to step up onto it. On my return trip I took the bridge. Sean also marked the trail and provided a trail kiosk at the trailhead.

I was grateful for the trail markings. Some dirt bikes have spent time on these trails, and Sean’s red arrows kept us on track at some spots that would otherwise have taken us directly into neighbor’s backyards. The motorized traffic has exacerbated the icy conditions  on the trail. That is, until we encountered a huge pine tree fallen across the trail, near the river. Probably dead for many years, the pine had few branches left on it, so it was a matter of grabbing hold of the stubs of branches and clambering our way over the tree to continue on the trail. 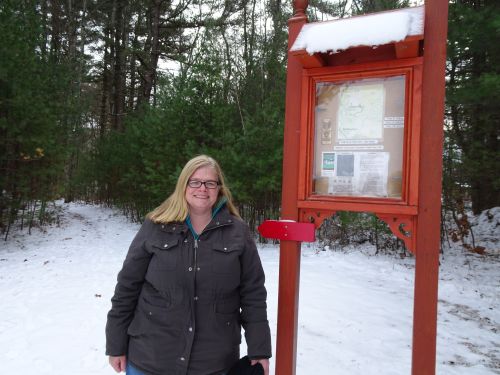 Christine is still smiling at the end of our walk.

The tree acted as a barrier to motorized traffic, and we found the rest of the trail to be much less icy. The trip back seemed to take much less time. For the most part the trail has a very gentle slope, downhill toward the river, and then of course slightly uphill as we went back. Despite the ice, the upward slope was easier to maneuver than when we were headed downhill. 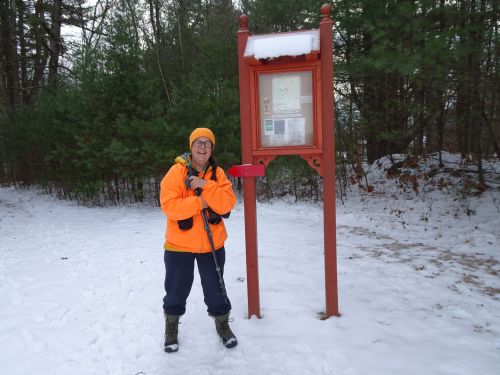 Happy dance, getting outside, and making it back in one piece after traveling on somewhat icy trails.

And so winter hiking is upon us. Blaze orange is still the rule since hunting continues into January. Layers of clothing, including a windbreaker, are really helpful in keeping warm in these colder months. Leaving time to get back before dark is a great idea. And walking on trails one is familiar with, or at least going with someone who is familiar with the trail is a good precaution to take, especially when trail conditions are questionable.

Thanks, Christine, for joining me and helping make this a challenging but really fun walk.

Marjorie Turner Hollman is a personal historian who loves the outdoors, and has completed two guides to Easy Walking trails in Massachusetts, “Easy Walks in Massachusetts 2nd edition,” and “More Easy Walks in Massachusetts.” A native Floridian, she came north for college and snow! Marjorie is a Certified Legacy Planner with LegacyStories.org, and is the producer of numerous veterans interviews for the Bellingham/Mendon Veteran’s History Project. http://www.marjorieturner.com