Kidnapped! Return to the Quinebaug river in Southbridge

Along the Quinebaug River, Southbridge, MA

During the week I tend to explore trails that are pretty local, getting out quite early in the morning to beat the summer heat. But we often get out on our tandem bike on the weekends, and for that, my husband and I venture to new places farther from home. Last weekend we visited the U.S. Army Corps’ Westville Dam area in Sturbridge. But this past weekend we had an errand to take care of in Sunderland, MA.

On our way out that direction, we stopped for a short walk just downstream from the Westville dam. The weather was overcast, cool even, a surprising reminder of cooler, fall days to come. Rather than bring our bike, we opted to keep things simple and stick to walking.

As we approached the trail Jon had in mind, I was startled by a familiar sight–my name, on a street sign! And in fact, Marjorie Lane is the turn off to one entrance for Westville Dam, but it is also where we accessed the downstream trail, just short of the dam entrance.

Easy walking on this wide, flat path alongside the Quinebaug river

Once we got down to the stream, it was easy, easy walking, a broad, clear track alongside the Quinebaug river for perhaps a half mile or so. 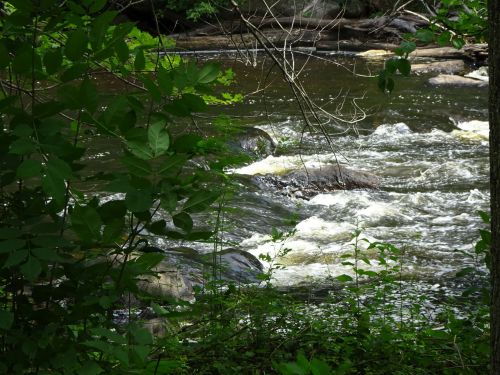 The sounds of rushing water accompanied us on this entire trip, such a sweet sound (as long as your house isn’t built right next to it, with the river at flood stage!) 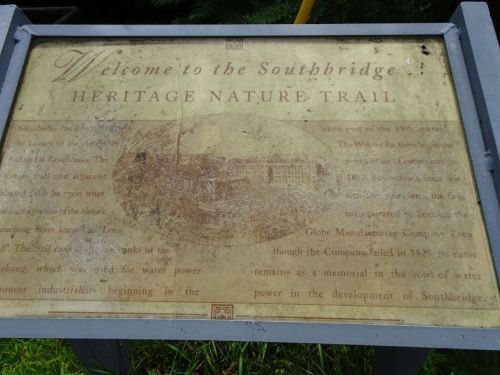 Trail kiosk at back of soccer fields of local Southbridge school, just outside Southbridge center.

At the end of the trail we found an alternate entrance, behind a school right near the downtown in Southbridge. The kiosk at this trail entrance called this section of trail the Southbridge Heritage Nature trail.

Flycatcher hanging out on the river

The ramped walkway at this end of the trail allowed for easier access. Clearly the Army Corps folks have helped with this trail work–for most of the walk we could have ridden our tandem alongside the river on the wide, packed, crushed stone surface. 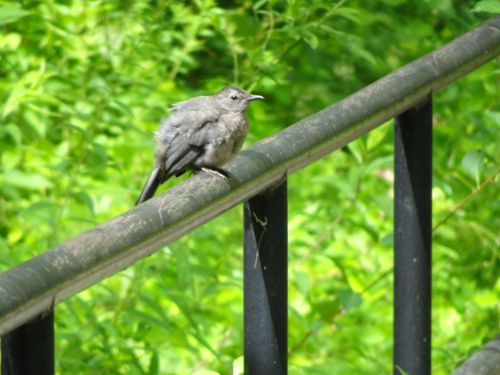 Juvenile catbird perched on the railing of a boardwalk on the trail, built to help span marshy areas along the trail

We spotted a number of birds on this trip. A fluffy juvenile catbird hopped along on the edge of the trail. A flycatcher flitted about amongst the trees overhanging the rushing river, and when we walked back to the dam itself,

we discovered cedar waxwings hopping from rock to rock in the canyon-like section of river just beyond the dam. 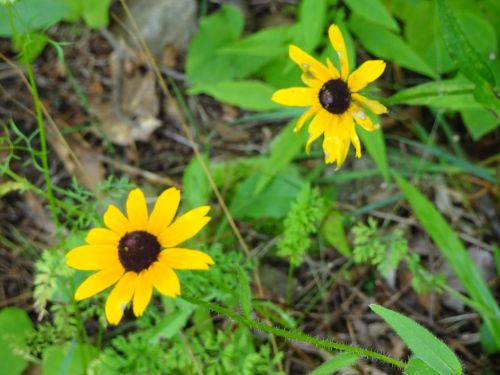 Lazy susans in the full sun

The summer flowers are in full bloom–the walk to the edge of the dam was in full sun, with a variety of summer blooms to enjoy. But the sun was coming out, it was warming up, and time to be on our way. We made a quick stop at the Marjorie Lane sign for a quick picture, wrapping up this portion of our outing. 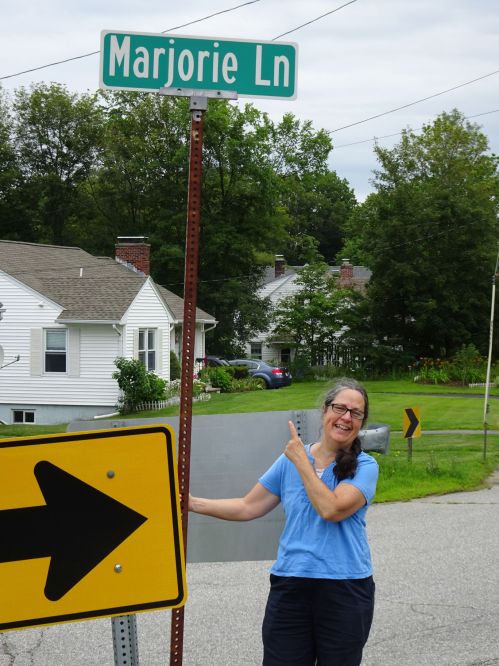 Hey–I”ll remember the name of this street, for sure!

2 responses to “Kidnapped! Return to the Quinebaug river in Southbridge”