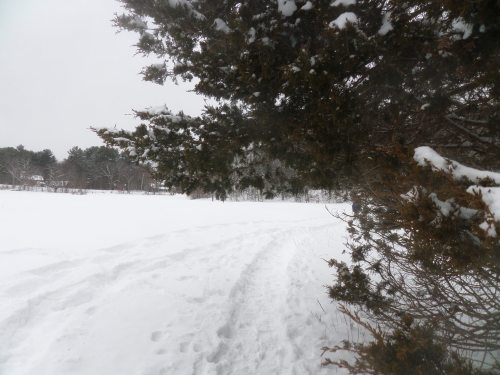 On the trail at Birchwold Farm, Wrentham

Maybe it’s just me, but I have a terrible time asking for help. I’m much happier being the one who is helpful, has the right answers, knows just the right place to go to obtain whatever help you might need. Yes, it’s a learned trait, and one I came by naturally. My mom was the one people often turned to. They knew that if she didn’t know the answer, she would be able to suggest who could help. She called it, “Kuhl’s consultant service,” always said with a smile. (“Kuhl” was our last name.)

I worked very hard to avoid being the one who needed to ask for help until life events took over and there was little choice. Finding myself a single parent, boy, did I need help! Later, because of illness, I needed even more help. Thankfully, my life is much more stable these days, but there is still a lot I need help with. I was reminded of this today, as we set out for Birchwold Farm in Wrentham with our snowshoes, to enjoy the recent snowfall. 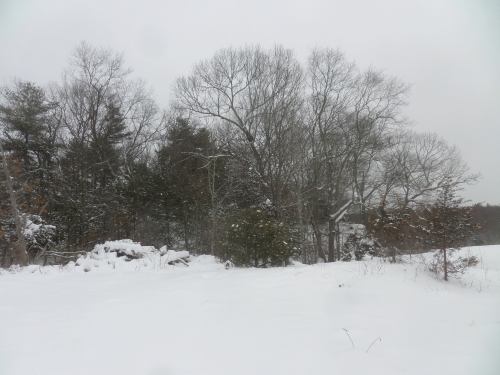 I’ve written some books on hiking, guides to very local trails, so some people have the mistaken impression that I am a gung ho hiker who is ready to scale mountains. In fact, the title of the books includes the words “Easy Walks” for a reason. I only take “Easy Walks” if there is a choice. Sometimes the paths we take are more challenging that I’m happy with. And mostly I will keep going anyway, but make a mental note to consider it a “one and done” sort of explore. On those more difficult treks, the effort to keep myself safe and avoid injury because of precarious footing prevents me from looking around, appreciating the views, noticing tiny mushrooms alongside a path, spying birds nearby or wintergreen nestled on the trail.

Once we arrived at Birchwold Farm today, a nice open field of conservation land in Wrentham, MA, my first challenge arose. Several muscles in my leg have atrophied, and getting back up from a squatting position is extremely difficult. I love to snowshoe, but there it is. I need some help getting strapped in to the snowshoes to even get started.

It quickly became clear that the snow was deep enough that my husband needed to break trail for me. We soon tromped out into the open field. Jon’s shoes are narrower than my own, so the edges of my snowshoes caught the higher snow outside the track, threatening my balance with each step.

We spied a family who had been getting their children ready to head out on their snow shoes. The parents with their young children called back and forth, enjoying the fun of exploring on a cold winter’s day. Taking our time, enjoying the views, and seeing others having fun outdoors together gives me such deep pleasure.

My happy place–outdoors, with the help I need

We headed toward the stream that flowed along the edge of the field. Deer prints cut lines through the snow, and the path of dog prints gamboled through the drifts. As we entered the woods in search of the stream we spied tiny mouse prints that began at the edge of a rock outcropping, then disappeared under the protective snow cover next to a nearby fallen tree branch.

The climb down to the stream was precarious. The crampons on my snow shoes helped, but the descent was still challenging. We found the stream mostly covered with overgrown branches and brambles, the wet spots peaking out shyly through the jumble of bushes and snow drifts. The effort to climb down convinced us I’d had enough, so we climbed back out, away from the stream. 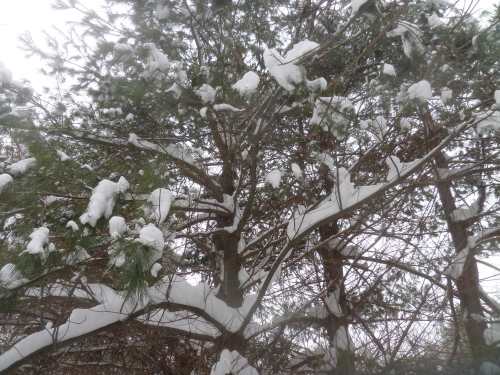 Looking up into the snow covered pine.

The trees still had a heavy snow burden from the previous storm, even as snow had begun falling again. As we passed underneath some snow-laden branches, I wanted to take a picture looking up. Jon suggested that instead he take a movie of me underneath the branches as he jiggled them, sending snow showers over me. I pointed out that this would be a lot more fun if I was the one taking the pictures and dumping snow on him. In the end we agreed to leave the snow to fall from the branches without our help. 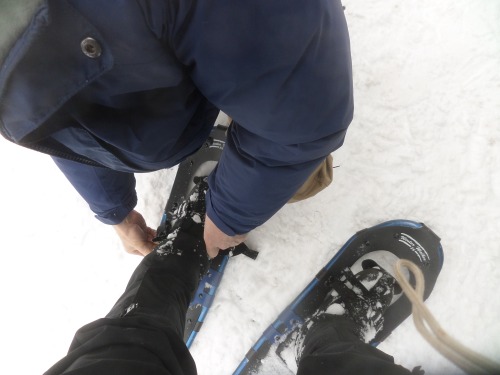 Helping me get snow shoes on, and back off–moments of grace

And thus we got to the last stage of our outing–removing the snow shoes. Once again, Jon bent down, released the clips on my shoes and helped me step out on the snow. He also made sure I got back into the truck without sliding underneath the vehicle. (Yes, this happened once. Our marriage does not lack excitement.)

It seems such a simple thing–accepting that everyone needs help with some things. And yet I still chafe. I’ve been spending time lately with a group of visually impaired people  who have been walking indoors at a local hospital in Worcester. Some of those who have more recently lost their sight resist carrying a white cane that would alert others that they are blind and might be in need of assistance. I understand that sentiment. The problem is, when help is needed, passersby don’t understand the need, and may not grasp the situation. My own unreasonable wish is that others could read my mind, giving me space when I need it, coming alongside to help when necessary. But last I checked, mind-reading is still a little known talent.

And so I write, and share my writing. But the truth is, asking for help is still up to me, or you, if and when you need it. It does get easier with practice. But what I also have learned from my friends who are visually impaired is that all of us have things to teach others, and gifts to share. May we each slow down enough to enjoy the view, be grateful for help offered, and ready to offer a hand using the gifts we each have.

2 responses to “Asking for help”