Passing on a tradition: Coconut Candy

There are lots of things to do around the holidays, but making time for holiday traditions is pretty high on my list of “things to do” and today’s to-do list had on it, “make coconut candy with grandgirl Nicole, and her mom,” my daughter Anna.

I couldn’t tell you the first time I made toasted coconut candy. In my family as I was growing up, it was simply something we did every year. Dad worked for the phone company, and part of his job as a forecaster, projecting growth in then-rapidly expanding South Florida, was to drive around counting housing foundations. “Counting houses” is what Dad called it.

We were always thrilled to learn Dad had been out counting houses, since he usually managed to bring home five or six coconuts he’d found on his tours around Broward County. Like northerners throw out piles of leaves in the fall, so people in South Florida regarded coconuts as yard trash, and tossed them by the curb to be picked up with the rest of their trash. Dad simply stopped when he spotted the nuts and tossed them onto the back seat of his car.

We kids were easily enlisted to help turn this “trash” into treasure–toasted coconut candy. First the outer husks had to be removed–we drove two shovels back to back into the tip of the coconut, then pulled the handles together, prying the thick husk off the inner shell.

Anna tackling a coconut back in the day…

My children grew up here in Massachusetts, but I made sure to introduce them to the secrets of making coconut candy, and year after year we bought coconuts at the grocery store and made coconut candy for Christmas gifts. 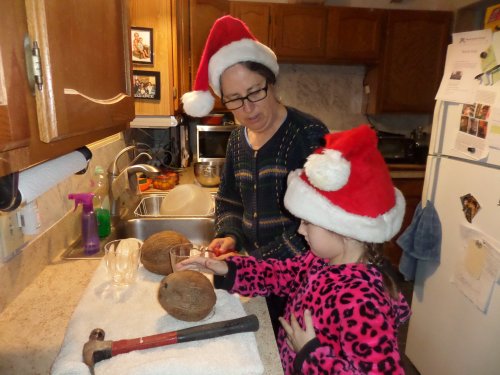 I always check to be sure there’s lots of coconut “water” still inside the nut. Shake it–you’ll hear the water slosh around inside the nut. That water makes the difference between an edible and inedible coconut, but will also make a mess if you don’t drain the water out before you crack open the nut.

When Nicole and Anna arrived today, I got out the hammer and screwdriver–essential tools in this tradition. Nicole thought using a hammer and screwdriver in the kitchen was pretty cool. We made two holes in the “eyes” of each of our two coconuts, then drained the water before we moved to the next step. I never liked the taste of coconut water when I was a child, and despite some people’s enthusiasm for it (I see it bottled in the grocery store) I will still pass on drinking it.

We then wrapped each drained nut in a plastic bag to insure no hard shards went flying once we started hammering. Anna and Nicole each took some good swings and soon had the nuts open, ready for the next step.

Mom and Dad taught us an easy trick for getting the white meat out of the coconut shell. We placed the broken pieces on a baking tray, set in a 350 degree oven for about 20 minutes, let the pieces cool, then popped the meat out with a dull knife. Easy!

Next, that yucky brown skin on the outer portion of the meat–not tasty. The vegetable peeler (that was Anna, wielding a potato peeler) made short work of removing the brown, outer husk, a quick rinse, and we were ready for…more work. 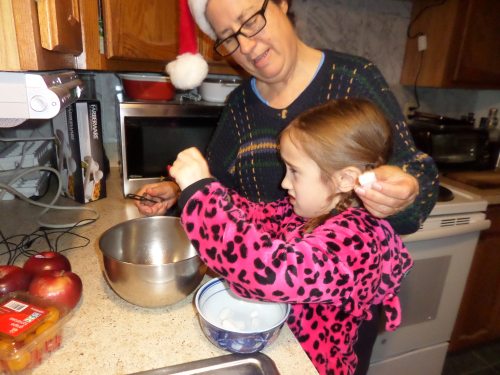 Small chucks of coconut meat are tough to peel…

Nicole is only 6, so her interest in the process flagged, but we found other things for her to peel while Anna and I continued the process.

Clementines are much easier to peel for a little girl

Anna noted that it had been years since we had made coconut candy. Why now? Perhaps because it was time; time to be sure another generation knew how to make this special treat, and time the next generation heard the stories, of my dad and his family traveling from Minnesota to South Florida, where they discovered tropical delights such as coconuts, and began what has become a tradition in our family.

Within about an hour Anna and I had transformed two coconuts into a tray full of coconut meat, sliced into thin curls, ready for toasting. A teaspoon of salt per coconut, sprinkled lightly over the entire shallow tray of coconut was all the seasoning this treat required. A 250 degree oven did the rest of the work, and my kitchen timer reminded me to stir the coconut every 20 minutes or so. After about an hour, the tray was almost completely toasted, just hints of the white meat still showing amidst the golden brown curls. 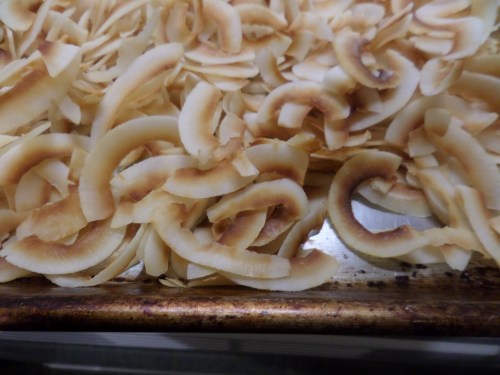 When it comes to Christmas presents, making time to do things together with those you love is right at the very top of my list of precious gifts. “Thanks for making my day,” I said, as Anna and Nicole packed up to head out. My heart is full, my kitchen smells wonderful, and a tradition is being passed on.

4 responses to “Passing on a tradition: Coconut Candy”