Easy Walk on the MA Coast

It’s finally dawned on me that “all” the walks I take are easy walks. It’s what I do. Summer heat and I don’t do well together, so we headed out early to the south MA coast, Westport, MA to my favorite spot, Gooseberry Island. Almost contiguous with Horseneck Beach, Gooseberry Island feels like a world away from the extremely popular state beach. The Island is joined to the mainland by a causeway, and like Horseneck, is also owned by the state and patrolled by rangers. But this little spot has limited parking, which is free, and port-a-potties only for facilities, and only during the summer season, Memorial Day to Labor Day. Since it was an overcast and a somewhat drizzly morning, the parking lot was nearly empty when we arrived around 10:30AM.

Each visit we’ve made has offered something that has felt surprising, even wondrous at times. There are always double-crested cormorants resting on rocks or feeding just offshore. We’ve spotted osprey hunting, eider ducks followed by  flotillas of ducklings bobbing in the surf just behind their mothers, and multiple varieties of sandpipers pecking amongst the rocks at low tide. One late summer afternoon we observed a large number of migrating monarch butterflies. I’d never seem butterflies at the ocean, and I watched in dismay as these lovely creatures were repeatedly swept offshore, only to make their way back to dry land.

The tower in the distance was used to keep watch over the waters of Long Island Sound, which nearly surround the spit of land that is Gooseberry Island. 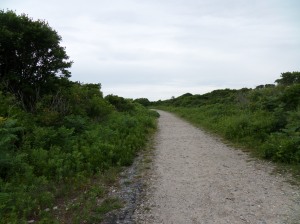 The formerly paved path, used to access the watchtower, is now a hard-packed dirt and sand trail that intersects the middle of the spit of land. This makes it quite easy to reach the far tip of the island, which juts out into Long Island Sound.

“Like” us on Facebook at “Easy Walks in Massachusetts” for updates about new trails and all things outdoors. 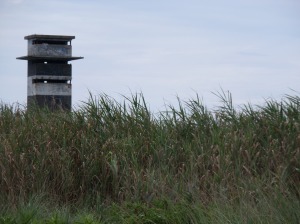 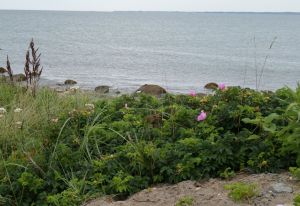