We rarely get a choice of who we share a neighborhood with. Little did I know when I moved to Bellingham, to the little neighborhood at the top of the hill overlooking Silver Lake, that I would someday hit the jackpot of neighbors, just when I needed them most.

I was reminded of this last week when I was invited to partake in a virtual gathering of women passionate about books and reading, a sort of “Book club” if you will, initiated by Julia, who had grown up next door to me when my children were growing up. As each person introduced ourselves to the group, we explained how we knew Julia. I explained that I had known her since before she was born, the much anticipated daughter her mother had longed for. Somehow the Pink Princess story came up, and I told the group a very little about Julia becoming a pink princess, and some of my role in making this happen.

Julia was able to find me a photo of her in the Halloween costume that she and I had sewn for her when she was seven. Her mother hated to sew, and was most grateful when I volunteered to help make a little girl’s dreams come true of becoming a pink princess for Halloween. As I had Julia try on her costume before we hemmed it, she started shaking. Was she cold? “No, I am so excited,” she explained to me. Yes, the work involved had been well rewarded. We later worked together to help her stitch a small coin purse from the same pink satin material, and Julia used her handy sewing kit to finish up the hand stitching after I helped her use my machine to stitch up the side seams.

In her younger years, Julia dyeing eggs for Easter

Our Pink Princess adventure was only one of many we shared as neighbors over the years. Julia’s mother Chris was ready to throw a party for any or no reason. I had become ill just a few years before, and  had limited energy, but Chris was always ready to include me at whatever level I was able.

I became Chris’s willing side kick, and our children were (mostly) willing participants. During those years that we shared being neighbors, I wrote numerous little short stories about our adventures, which I have saved. What a joy it was going through them, in thinking about what I could say about the pink princess. 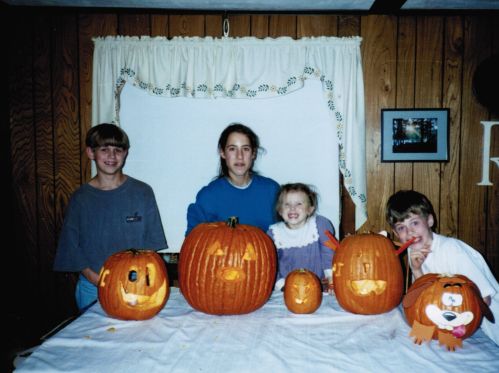 Pumpkin carving with siblings and neighbors

There was the “petit-four panic” which I was called to help with, after Chris got in mind to make petit fours by melting chocolate in the microwave to frost little the cakes for a party. The results were mixed, and we found ourselves taking about the characteristics of carbon. But the party went on regardless. The “Easy Bake” oven adventures were another story, sharing peanut butter cookies baked by Miss Julia.

One Thanksgiving brought the “Great Cranberry Bouunce”, in which the pink princess (Miss Julia) determined that every cranberry must first be tested by flinging it onto the table to see if it would bounce over a folded piece of paper. Her mother and grandmother gamely stood at the other end of the table and caught (most of) the cranberries Julia flung.

St. Patrick’s day meant green milk shakes for all of the neighbors. Easter meant an Easter egg tree and a group session of dyeing eggs. Christmas  brought graham cracker gingerbread houses. But Halloween was surely the most festive, celebrated with a neighbor potluck each year, complete with eyeball chili, Halloweiners, and whatever other recipe we could come up with that had any connection to Halloween.

Ready to head out for trick or treating together

We all went trick or treating as a group around the neighborhood, then returned to have the Bertine Street candy exchange. We had to watch out for the older kids, who had no issue talking the little ones out of their chocolate bars. 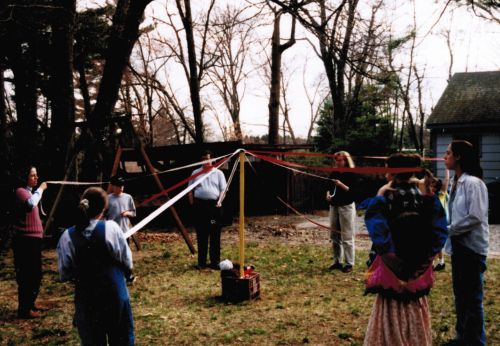 One day Chris got in her head that we needed to celebrate May day with a maypole dance. She just needed a pole, and a yard big enough to dance in.

It all came together, and everyone did their part.

When the pink princess and her family moved, we stayed in touch with the family. Sadly, shortly after they moved, Chris died quite suddenly, a loss we still feel. Recalling the joy and fun of time spent with her, celebrating a pink princess and so much more is a way of keeping her memory alive. Spending time, even virtually, with the young woman who was our neighborhood’s pink princess was a joy that is beyond words for me. Seeing the woman Miss Julia has grown into is a real gift. How lucky I have been to have shared life, love, and joy with a pink princess, and with so many who have loved her.

6 responses to “The Pink Princess”