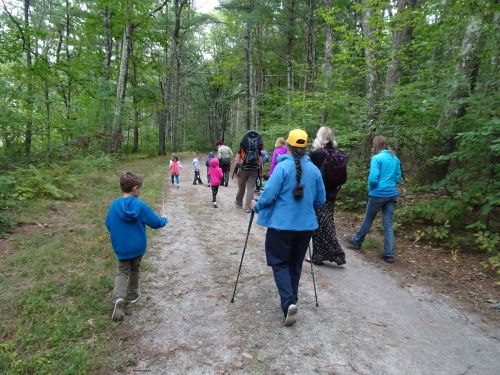 Heading out on the trail

The concept of a Make Your Own Storybook hike is simple–take a walk together, explore along the way, and come back to write or draw about what we experienced. After a summer hiatus, the Make Your Own Storybook hikes have started back up. This past weekend we visited the Upton State Forest, and were joined by several families with young children, some literate, some not, but by the end, it appeared that everyone had a grand time in the outdoors. We were blessed with terrific volunteers, enthusiastic families, inquisitive children, and cool, overcast skies. 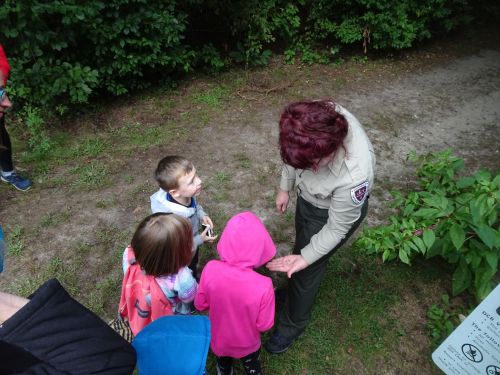 We were also joined by our co-sponsors for the event, DCR, represented by ranger Kathryn Parent, 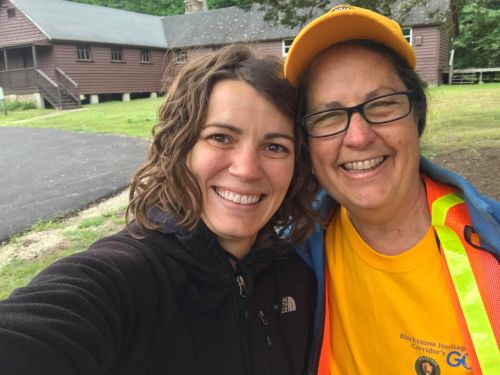 Having fun, Angie and me, at the Upton State Forest

Angie Stormont of Roots in Nature, as well as Blackstone Heritage Corridor VIPs (volunteer in parks) Dick and Jill Winski. 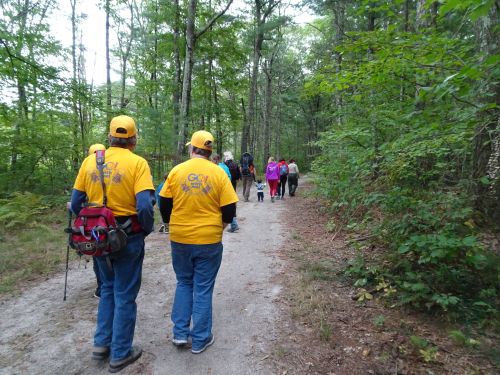 Dick and Jill decked out in their Go! attire, taking the role of sweep to make sure we had no stragglers

Earlier, the day of our event, the Bay State Trail Riders Association (BSTRA) had hosted an event at the state forest, so we not only were able to catch a glimpse of some beautiful horses getting loaded into their horse trailers, we also found ample evidence along the trail that the horses had been there before us! Not surprisingly, poop became an essential feature of several of our storytellers’ narratives. 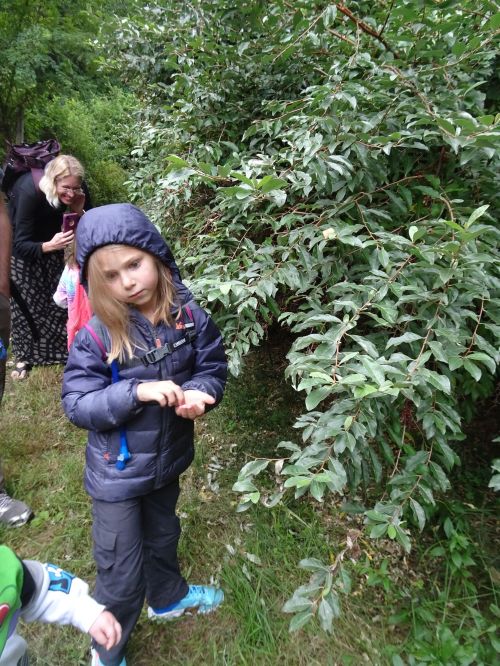 Checking out the autumn olive bushes 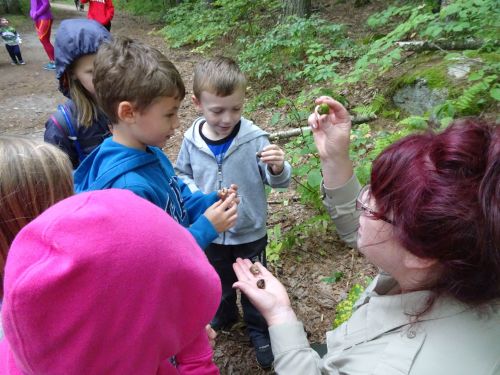 Checking out beechnuts along the trail

beechnuts along the trail, and flowering jewelweed, sporting “touch me not” pods. 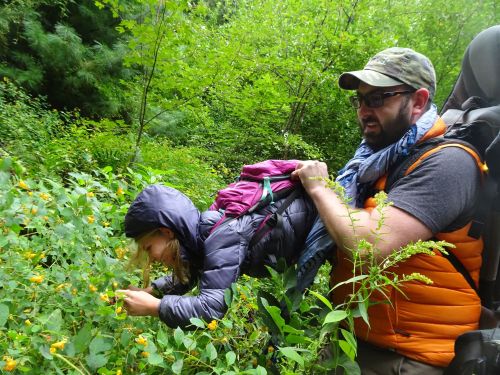 Dad gives his girl an assist to reach jewel weed pods that had not yet been popped!

When the jewel weed pods are just at the right stage, they will instantly pop open when touched, which delighted young and old. 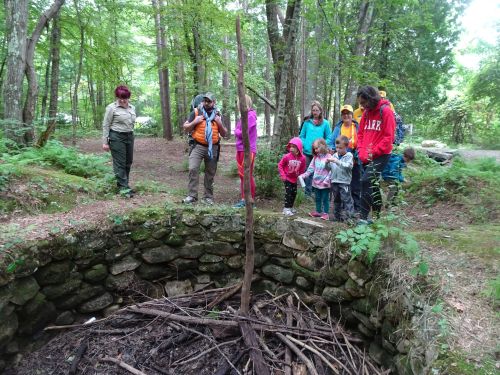 CCC water hole, normally filled with water, but dry in the fall

We came across a CCC water hole, created in the 1930’s during the Great Depression. Unemployed or underemployed men were sent out to rural areas throughout the state under the Civilian Conservation Corp (CCC) program, an effort to prop up employment levels. Crews spent time building fire roads throughout state forests and created watering holes that were intended to assist with fire prevention. 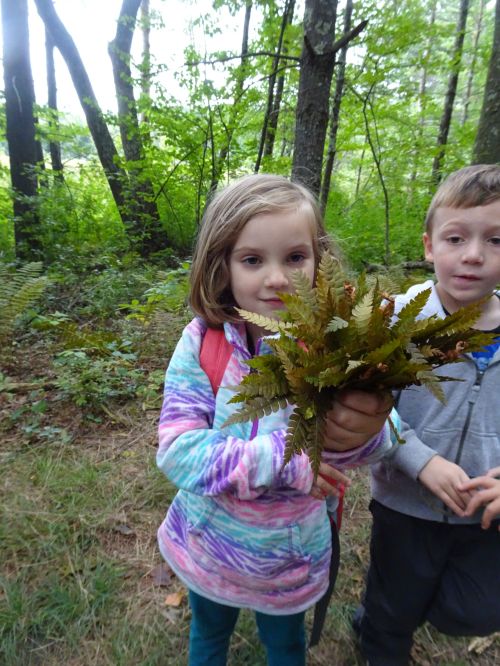 Some children gathered small treasures: leaves, fern fronds, and berries, along the trail and later used some of these to decorate their books. Ranger Kathryn kept a close watch on the group during the walk, asking questions, and prompting participants to pay closer attention to our surroundings. 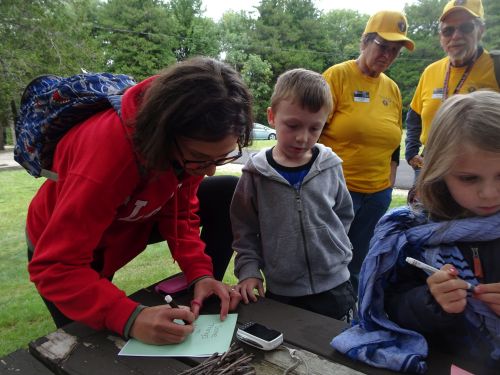 Mom writes down the story for her son

When we returned to the picnic tables to write our stories, all but the very youngest had lots of ideas about what they wanted to write about, and parents and adult helpers all joined in on the fun.

Some stories were fanciful, while others offered step by step descriptions of the entire walk, 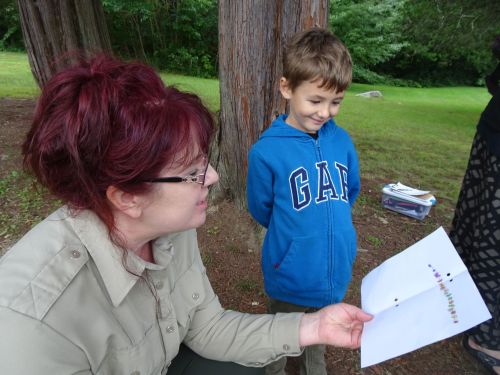 coordinated with photos taken along the trail. 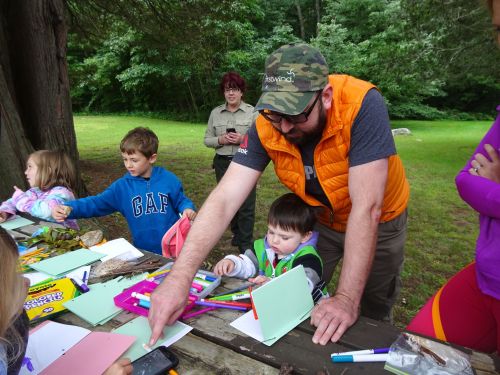 Even the youngest found ways to participate

Each story was different, 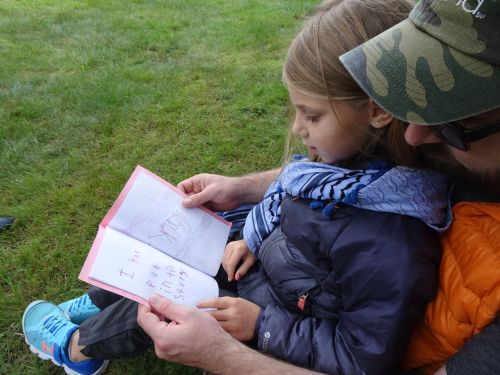 Sharing a finished story together

and the storytellers were all proud of what they accomplished in a short time. 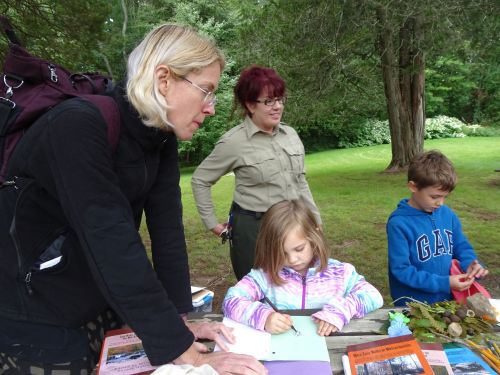 Fall is on the way, and we are looking forward to cooler weather, the change of seasons and lots more chances to explore the outdoors. So many reasons to “GO!” to the Blackstone Valley. Come join us! 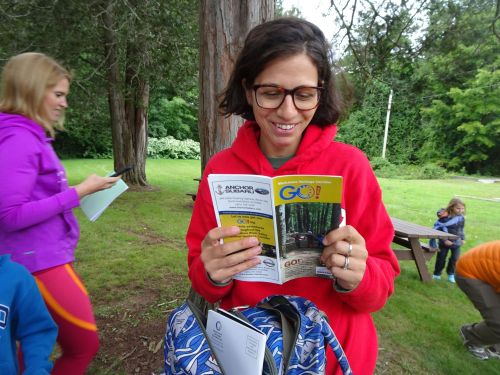 Checking out what will be their next adventure