Testing Out the Waters–The Power of Prayer 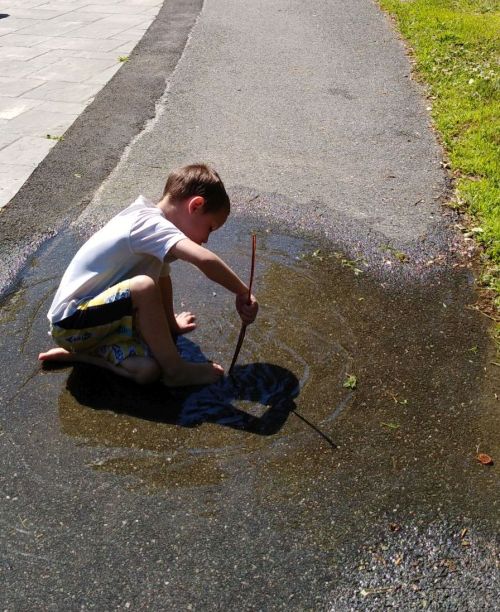 Testing out the waters

The other day, a dear friend at church, Barbara, approached me.”I get to pray for you!” she said. Sometimes, when people say, “I’ll pray for you,” it’s a somewhat smug way of telling the offender that they have messed up, but rather than say that, and be accused of being judgmental, they simply promise, “I will pray for you.” I guess it’s all in the tone of voice, but also in the intent. Barbara’s intent communicated her delight in being asked to pray for me. She assured me that the others who were helping with Vacation Bible School the following week would also be bolstered by their own personal “prayer warriors” — spiritual “secret Santas.”

I had volunteered, in a very low-key way, to participate in our church’s Vacation Bible School, (VBS) and my biggest job was to be grandma to my two grandchildren, who would be attending. Now, Nicole is a veteran VBS kid, so she needed neither supervision nor reassurances, but this year we were including David, her 5-year-old brother. And David was a newbie. He didn’t want to be left out, but he also didn’t want to jump in. So, the first couple of days, David and I hung out a whole lot, staying along the fringes of the activity, checking out what his group was doing, but making it clear that he was free to participate as much or little as he wished.

I had brought my camera along, and my ostensible “job” during the week was to get pictures of the kids and the fun stuff that happens every year at this time. But in my mind, my most important job was to provide a safe place for my grandchildren and to provide hugs when needed, lots of smiles, and no demands. And by the end of the second day, David was heading off quite happily, except when the children danced to rather loud music. “I don’t dance,” he stated. No problem, there was alway a spot next to me during the dancing, and no one cared one way or the other.

Throughout the week, I thought often about Barbara’s prayers, and her love, which is poured out to so many whether they know it or not. When I saw her the following Sunday, I thanked her, and mentioned that it was a nice feeling to know she was praying for me. I described how my heart goes out to young mothers, especially when I see them struggling with kids in public places, and that I try to catch their eye, and say, wordlessly “Those years really fly by, but the days can be endless.”

Barbara smiled, “But you never know who may be praying for those mothers and children. You knew I was praying, but there are others who care and are praying, but no one may ever know.”

And that brought me back to something I never wanted to write about. To another Vacation Bible School session, so many years ago. I was a young mother then, constantly overwhelmed by motherhood, but still uncured of my people-pleasing compulsions. I had been asked to take some responsibility (I have no memory what that was, only that it felt important at the time), to help teach VBS, and my then 3-year-old was feeling reluctant to participate. He clung to me. I chafed. The more annoyed I got, the harder he clung. Rather than offering the hugs he clearly needed, I pushed him away, in the same way I had felt pushed away when I had been his age. Oh, the sins of the fathers (and mothers) do get passed on through the generations.

In a fit of panic, anger, rage (who knows what drove me?), I grabbed my child and stuck him in our car with the windows open. What I hoped to achieve by this I have no clue. But he certainly knew this was not where he belonged. He scrambled out of the car, and someone else found him and brought him back to me. Reproach radiated from every part of that person’s body and gaze. I have never forgotten the deep shame I felt as I took my child, who was safe, but whom I had allowed to be in a place where he might not have been safe at all just because I couldn’t handle my own emotions.

I never placed either of my children in such a compromised position again. But over the years, I had never been able to forgive myself for the “what if…”—the thought of what might have happened to him. And yet, years later as I sat with my grandson, watching him cautiously and slowly test out the VBS waters, I found myself telling others, “He’s a lot like me. I’ve never liked to jump in the deep end. I’d rather try things out and see how it feels.” And I found myself wishing I had been able to freely offer that reassurance to my own children when they were small. But with each reassuring hug I was able to offer David, I also offered a modicum of forgiveness to myself for who I hadn’t been able to be for my own children, and to my mother for what she hadn’t been able to offer to me as a child, either. I allowed the reality of the health issues I live with to help me understand the magnitude of the forces that have led me to give up my people-pleasing ways. The exigencies of my health issues have caused me to embrace taking care of myself first. Only by doing this, I now know, am I able to be available for this little guy who snuggled up next to me while the other children rocked out to the music at VBS.

All those years ago there must have been people praying for me who never declared themselves. The road I have traveled has certainly not been smooth, but day after day, grace has won. I have learned over and over that love is more powerful than hate, and that hugs are healing, both for the one who is in need of a hug, as well as for the one who reaches out to give it.