Eiders just off the coast in Acadia National Park

It was unseasonably hot recently and we decided to head north, to where the temperatures were only in the 70’s and spring has just started. The trees still lacked any hint of green, but change is in the air.

For several reasons we chose not to bring our tandem bicycle and planned on spending our time walking the trails of Acadia, on Mt. Desert Island, where we stayed. But we wanted to explore the Schoodic Peninsula, also part of Acadia National Park, but much less visited. 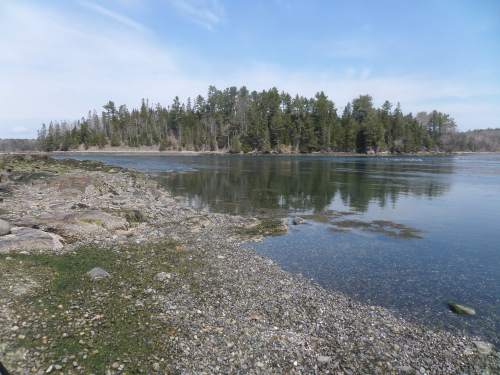 The tidal falls at low tide

We stopped at the Tidal Falls in Hancock, Maine  and spotted seals swimming against the tide. We never caught the tidal rip at its height, but enjoyed the dynamic feel of the tides, regardless.

While we stood watching for seals, my husband spotted a bald eagle on the opposite shore, resting in a pine tree.

Red breasted nuthatch creating a nest hole in a white birch, at the entrance to the carriage trail

Once we arrived at the Schoodic peninsula portion of Acadia National Park, we stopped several times to get out, walk, look and enjoy the views. While checking out the carriage road near the entrance to the park, we heard a tap, tap and looked around for a woodpecker. what we found instead was a red-breasted nuthatch tapping out a nesting cavity, right at the trailhead for the first carriage road. This nuthatch, smaller than it’s white breasted cousin, was focused on its task, and so we got a chance to get a few pictures of it.

Another reversing falls, with a new bridge over a reversing falls as part of the carriage trail system on the Schoodic Peninsula of Acadia National Park

We soon found another reversing falls and stopped in that area for lunch, and enjoyed looking at mergansers, buffleheads and loons right off shore. 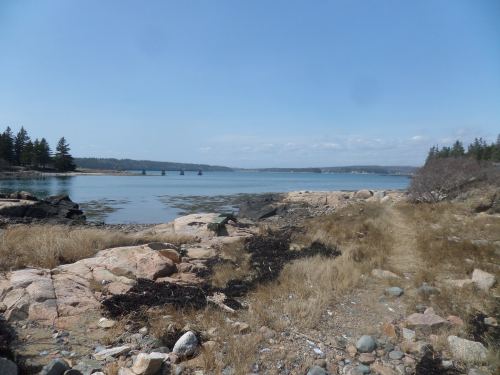 A nice lunch spot in the park 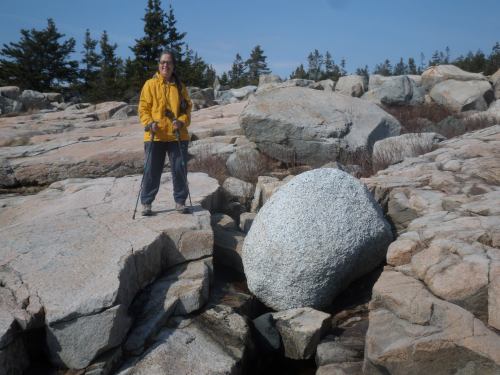 The rocks at Schoodic Point are relatively flat and pretty easy for me to navigate, more fun. 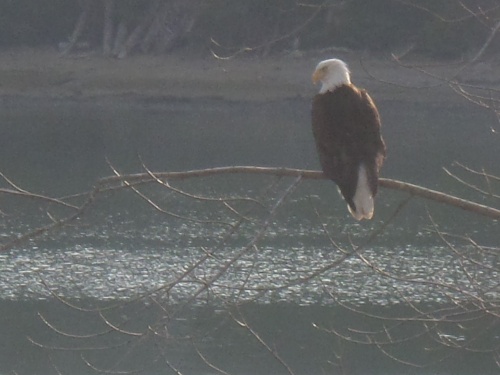 Another bald eagle, watching and waiting, seen by the roadside on our way out, after leaving the park

As we left the park we spotted another eagle perched quite near the road. We had heard eagles are becoming more common, but were getting confirmation of it ourselves in our travels.

Lots of male and female eiders, the rocks just behind them were filled with gulls.

The next day we headed south on Mt. Desert to the Wonderland Trail in Tremont, which offers a very easy walk out to a point on the ocean. There we found a huge flock of eider ducks, with a few buffleheads mixed in, as well as a massive flock of seagulls resting on the rocks just off shore. Suddenly the seagulls rose into the air in a chaotic disarray and my husband pointed. Eagle! A one eagle had singled out a solitary bufflehead, a bird much smaller than the eiders. The eagle seemed to dive for the tiny bird, then backed off, when suddenly two other eagles came from other the trees and the three huge birds circled.

It happened so fast we got no pictures of the eagles in flight, but our hearts were full. We were surprised at how quickly the eagles gave up the hunt and flew away. And yes, the bufflehead lived to see another day. Soon the eiders dispersed, as had the gulls (and the bufflehead).

On our way home we stopped at Wolfe’s Neck State Park in Freeport, Maine and found a nesting pair of osprey on a small island just off shore. 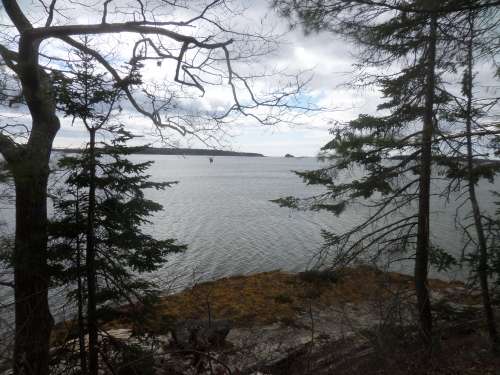 View from the trail just above the shoreline

The trail along Casco Bay at the lovely state park is quite easy walking, with views of the bay all along the trail.

The weather is cooler now, but spring is here. When you’re out be sure to look for more nesting birds, for ’tis the season, for sure!